What's Next for American Apparel?

The American Apparel saga follows a traditional arc. Starting with nothing, a man builds a simple idea—a high quality, American-made T-shirt—into a multimillion-dollar business. The company grows dramatically, opening hundreds of stores and becoming a brand name around the world. Then, at the height of its success, the business is rocked by scandals and accusations, leading to bankruptcy and the eventual termination of its founder.

Beginning, middle, end: it’s a classic story. You wouldn’t be wrong to close the book here, thinking there was nothing more to tell. As F. Scott Fitzgerald famously said, “There are no second acts in American lives.”

In the mid 1980s, a teenage Dov Charney began importing and screen printing American-made T-shirts for sale in his native Canada. An infatuation with vintage American design inspired his products and helped him build an audience. After a brief enrollment at Tufts University, Charney dropped out in 1990 to focus on what he was then calling American Apparel. 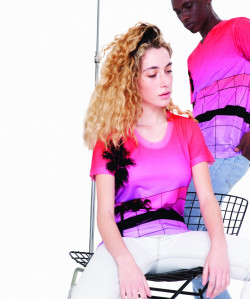 S/S Classic V-Neck on him, Women’s Sublimation S/S T-Shirt on her. Both by American Apparel.

Between 1997 and 2003, American Apparel’s wholesale business boomed. Domestic manufacturing allowed the company to quickly respond to trends, launching new looks in weeks, while competitors took months to catch up. People responded to the company’s “Made in America” message, as well as the high quality of the garments. It was during this period that American Apparel began producing the provocative and controversial advertising that launched the brand into public consciousness.

Supported by its lucrative promotional industry sales and strong brand identity, American Apparel opened its first retail store in Los Angeles in 2003, followed by stores in New York and Montreal that same year. By 2008, the company boasted more than 200 locations and 10,000 employees around the globe. The Los Angeles facility grew to be the largest single garment factory in the country and American Apparel became the biggest clothing company made entirely in the U.S. Riding high on its rapid success, American Apparel went public in December 2006, selling for around $8 a share and raising $120 million; the stock’s value would double by December 2007. Following the initial public offering, Charney became CEO and president while remaining the American Apparel’s majority shareholder.

Although American Apparel’s brand and reputation grew in the 2000s, not all the news was good. Between 2005 and 2014, Charney became the focus of seven sexual harassment lawsuits filed against American Apparel. (The company was never convicted on any charges.) The company began operating at a loss in 2010, and its stock dropped to below $1 in November of that year. These factors contributed to American Apparel’s board of directors suspending Charney in June 2014. He was terminated from the company he founded the following December.

In the first weeks of 2015, Paula Schneider was appointed as the new head of American Apparel. A fashion industry veteran who previously worked with BCBG Max Azria and The Warnaco Group Inc., Schneider was tasked with righting the ship and tackling the company’s $300 million debt. The first major step in that plan took place in October 2015, when American Apparel filed for Chapter 11 bankruptcy protection. A bankruptcy court judge in Delaware approved the company’s plan to reorganize as a private entity on Jan. 25, 2016.

Speculation about the company’s future ran rampant, with many suggesting the company’s end was at hand. Bankruptcy certainly sounds like the conclusion of a story, and for many other businesses it has been. American Apparel, of course, has no interest in acting like other businesses. Two days after the plan was approved, Schneider told The Washington Post, “It feels like a little bit of a rebirth.”

In other words, that was just the first act.

Today, American Apparel has emerged from bankruptcy. The immediate question is: What’s next? If this is a new chapter in the tale, where does the story go from here?

American Apparel does not want its story to lead back to bankruptcy court. Schneider has started cutting costs and eliminating inefficiencies that have eaten into profits for years. In the last 14 months, she slashed overtime hours at the manufacturing facilities; discontinued slow-selling items; and closed nearly 40 underperforming stores around the world, including the company’s first retail location in the Echo Park neighborhood of Los Angeles. More closures are expected in the future, although the company’s footprint is still large, with more than 200 storefronts as of February 2016.

Schneider’s changes will go a long way toward helping American Apparel become more profitable, as will the financial results of the restructuring: $230 million in debt removed from the company’s balance sheet, interest rates on payments lowered and an extra $80 million invested by the new bondholders into the operation.

That $80 million will be used to improve the supply chain and customer experience, but the debt reduction will have the greatest impact on American Apparel’s bottom line—slashing interest payments by $20 million annually. Sales were never the issue for the company—American Apparel had $600 million in net sales in 2014, the last full year its financials were reported—so the reduced overhead could have a dramatic impact on profitability.

“We have liquidity,” Schneider said to Forbes. “It doesn’t show in the numbers yet, but we’ve implemented a turnaround.”

Sources within the company say a major focus is on American Apparel’s traditional promotional base. Schneider has said wholesale is an important part of the company’s restructuring and the financial statements back this up: Net sales to the U.S. wholesale market were $208 million in 2014, a third of all company sales and more than any other single market, including U.S. retail. 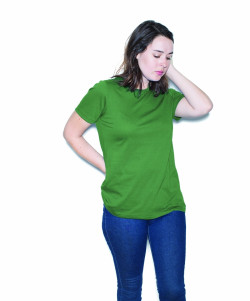 Gebhard addressed the systemic problems within the company that had affected distributors in the past, including inconsistent inventory and delayed shipments. A significant portion of the $80 million investment is being applied toward addressing these supply chain issues and improving buyers’ overall experiences. American Apparel’s wholesale website was recently revamped to be easier to use and better match the brand image, and the company is investing in new payment and customer relationship management systems to better aid distributor customers.

Material sourcing also is expected to improve. The massive interest payments in 2014 and 2015 meant the company was only able to purchase a fraction of the materials it required to make product, creating shortages of the most popular items. Gebhard said the restructuring plan allows American Apparel to buy the fabrics it needs to meet the demands of both retail and wholesale customers.

While American Apparel is making significant changes to its business, John Espiritu, marketing and social media coordinator for the company, explained that the fundamental essence of American Apparel will remain the same—the focus on high-quality basics, the provocative marketing, the progressive social policies and the domestic manufacturing will all remain a part of the company’s image.

“American Apparel is an iconic brand,” Gebhard said. “You can look at our photography and know and feel that it’s American Apparel. … Manufacturing within the United States is a fundamental part of the company’s identity and we will continue to be committed to it. That’s not going to change.” Schneider and the bondholders hope that these strengths, which made the company a powerhouse before, can do so again.

American Apparel isn’t the only one putting faith in those same tenets. Women’s Wear Daily reported that Charney has partnered with investment firm Hagan Capital Group to develop a “new venture”—an apparel company focused on providing men’s and women’s basics, made in America, for the wholesale industry.

Analysts remain cautiously optimistic about American Apparel’s future. “It has the potential to be a phoenix rising from the ashes,” Craig Johnson, president of research firm Customer Growth Partners, told the Los Angeles Times. Other industry experts have expressed similar sentiments; if the apparel manufacturer can avoid the mistakes of the past, it is positioned to emerge a smaller, but stronger, business in the future.

Early reports are promising. American Apparel said remerchandised stores are showing improved sales, the factory is loaded up with raw materials, and there is interest in new products on both the retail and wholesale sides. For a company not two months out of bankruptcy, that’s good news and bodes well for the future.

The future will come. Right now, American Apparel is concentrating on rebuilding itself into the company it wants to be.

“American Apparel is here,” Gebhard said. “Our manufacturing is not going to be done overseas. We’re still in LA, where everything is designed, cut and sewn. None of that is changing. It’s the same products you know and love. It’s business as usual.”

It may be business as usual, but it’s more than that too. It’s a come-from-behind nail-biter, a tale of the underdog overcoming the odds, a saga for rebirth. It’s a classic story after all.

This article originally appeared in the March 2016 issue of Promo Marketing.