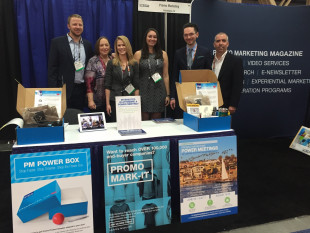 The Promo Marketing staff at the 2016 PPAI Expo

The new year is cause for excitement. Yes, it brings New Year’s resolutions, but it also brings thousands of promotional products suppliers and distributors to the Mandalay Bay Convention Center in Las Vegas for the Promotional Product Association International’s (PPAI) annual trade show and convention, PPAI Expo.

With this year’s approximate total attendance of more than 20,000—about 11,500 distributors, 500 buyers and 8,000 supplier personnel—wherever you go, wherever you look, you’re likely to make a new industry connection—trust us, we sat next to one distributor and behind two others on the flight out, and we weren’t even at the hotel yet.

When we caught up with Darel Cook, PPAI’s director of expositions and meetings, he explained two historic aspects of this year’s show.

Due to a major expansion at Mandalay Bay, this year the show takes place on one floor, rather than the two-level floor plan it has had for decades. In a way, it creates a completely new show—a new floor plan that both suppliers and distributors are unfamiliar with means developing a new path and plan of attack.

“This year was all about educating people on the new expansion,” Cook explained. From staggering open times for different halls to hosting grand prize drawings at an opening ceremony, PPAI did a lot to ensure that distributors worked the trade show floor evenly, still getting to see all the companies on their lists. Their efforts were a success, as one glimpse of the show floor reveals every aisle equally packed with suppliers and distributors fostering relationships.

And perhaps most notably, this year marks quite a milestone. For the first time, every single one of the more than 1,300 companies exhibiting at the show are “Product Safety Aware”—showcasing the entire industry’s dedication to providing safer products for the end-user.

“The great thing about Expo is it seems to be a good indicator of where the industry is,” said Cook. “So if good things happen here, that tends to mean the year is going to be good. The promotional products industry is going to do well. I will say, everyone came in upbeat [and] excited about what 2016 looks like. It’s certainly carried through with education, […] and now we see it on the show floor. Walking around, you just get a good, positive buzz of what’s going on, and I think that bodes well for the industry for the rest of the year.”

And if you’re in town for the show, don’t forget to swing by the Promo Marketing Booth No. 3231 and say hello!