At least 13 people are dead and dozens are injured after a boiler explosion at a garment facility near Dhaka, Bangladesh, Al Jazeera reported.

The blast happened late Monday at a plant operated by Multifabs while it was undergoing maintenance. The boiler, which was located in a tin-roofed shed, damaged a nearby three-floor building. 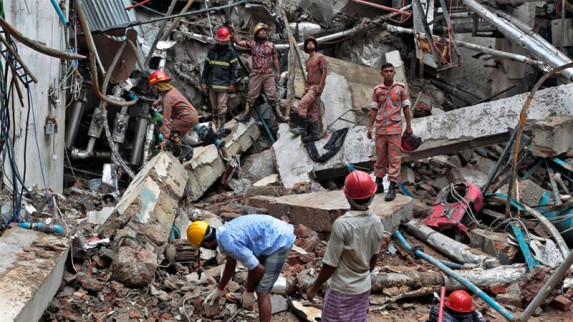 An explosion at a Bangladesh garment factory killed at least 13. (Image via Al Jazeera)

The building had been closed for 10 days for the holiday of Eid, and was set to resume operations on Tuesday.

"I heard a big bang when I was having tea outside," a factory driver told Reuters. "I saw windows, doors, glasses, machinery and a section of the wall of the building go flying."

Multifab said that the building was functioning, and that the boiler, which was only 6 years old, had just been serviced.

"The boiler was running well," Multifab chairman Mahiuddin Faruqui told Reuters. "After servicing, when workers were trying to restart it, it went off."

Bangladesh's garment industry has been under intense scrutiny after multiple disasters, including the Rana Plaza collapse in 2013 that claimed the lives of more than 1,100 people.

Because of this, some officials think this accident, and ones like it, are flukes that don't necessarily indicate problems in the industry.

"There has been a structural change, and we've worked hard for it," Sulav Chowdhury, CEO of the Bangladesh Knitwear Manufacturers and Exporters Association, told Reuters. "So I'd say this is a stray incident."

Local authorities called off the search for more victims yesterday. As of yesterday, up to 50 people were injured as a result of the explosion, including passers-by walking near the factory.

How One-Stop Promotional Apparel Solutions Can Simplify Orders, Add Value and Save on Costs
Comments
The Top Lists