Last week’s PPAI Expo East gathering in Atlantic City featured 302 businesses offering wide varieties of products and services, and although diversity marked their New Jersey-based presence, two themes ran common among them—pride and innovation. Every Promo Marketing interaction with the companies sparked conversations that made apparent that the exhibitors are spending 2019 displaying both, in earnest, and are encouraging their industry peers to be likewise ambitious. Here are the accounts of our Day Two exchanges with 10 members of the gregarious group.

For our first supplier of the day, we had to check out Chocolate Chocolate. (Who doesn’t love chocolate?) On display, there were plenty of tempting chocolate pieces, but one of our favorites had to be the smores kit—not only does this bring us back to our younger years, but it’s also a great item to have for the summer.

While we were at the booth, we chatted with Dawn Pilon, account executive at Chocolate Chocolate, about one of the newer products, the advent calendar, and she explained that this isn’t specifically for holidays anymore. 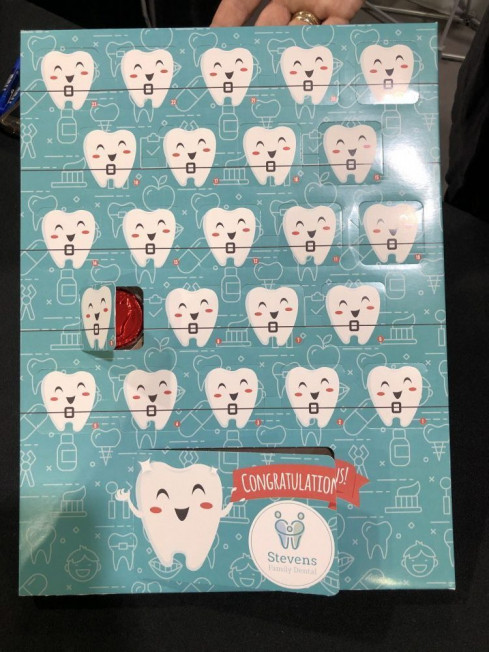 “We’re fortunate in that people are interested in everything that we have, and anything that lights up is going to fare well no matter where you go or who you are,” Schiffelhuber said in showing off a Best lit tumbler that has a matching cooler for those who want an especially bright drinking experience. “Everyone is looking for convenience, and these promise and deliver on that.” 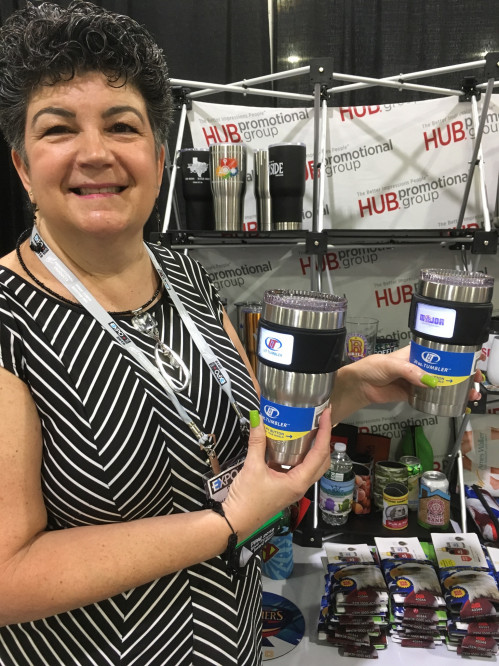 Vice president of sales Kenny Ved was a busy man for Goldstar on the show floor, and it’s no wonder why, as his California workplace specializes in “making writing instruments sexy.”

“We’re all about selling an experience and not a pen,” he said upon looking at dozens of beauties that certainly appeared more than capable of satisfying someone’s ink-based desires. “There’s a lot of value in making the best selection and enjoying the attention that it attracts.”

For Goldstar, the most eye-catching options have become full-color offerings, which Ved christened “hot sellers.” The man certainly knows how to extend a metaphor, doesn’t he?

“The packaging is really special. They actually customize any type of product that we have in our line, and customize around that. So two-, three-, four-piece packaging set that might include drinkware, some of our speakers, and anything basically on the line.” 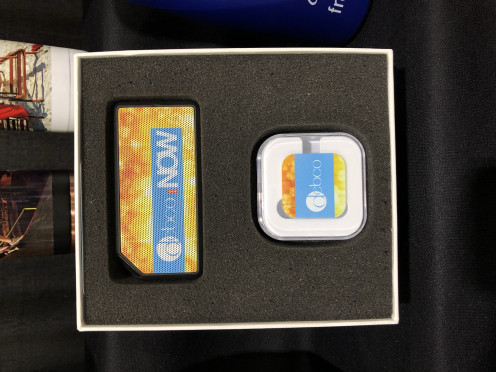 Talk about a display—or, in this case, displays. Joe Douglas, client relations manager for Orbus Exhibit and Display Group, shared a few new products that the company is bringing out, but his favorite and one that he was most excited about, was the Pop-Up Bar.

“It’s our most popular piece, it’s a portable pop-up bar that folds down and you can stack product on it and carry it around [and] fit all your booze on top of it,” Douglas said. 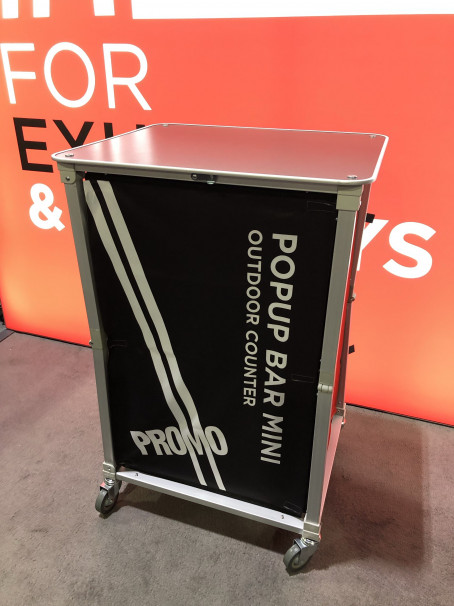 Massachusetts-based Storm Duds Raingear has acquired many durable partnerships, with 700 schools, Major League Soccer, the United States Armed Forces and Major League Baseball among them. Praise has been raining down for Meredith O’Brien and her fellow hires for years, and that sits quite well with the vice president of sales and director of imports for promotional products.

“The customer gets supreme quality when dealing with us,” O’Brien said of Storm Duds’ considerable clout. “People want durability when they’re going after brand awareness, so that’s where we really want to step in and stand out.”

Deeming Expo East “a nice mid-year way of connecting with distributors,” she spoke highly of her interactions with fellow attendees and promised continued diligence in Storm Duds’ means to provide cover for any eager client.

“Being in a niche market, we take our roles as experts seriously,” O’Brien said. “If you’re looking for the best, we’re here.”

One would have been hard-pressed to find a happier Expo East participant than Brad Adolph, senior account executive for Cloth Promotions Plus. As the Florida-situated company’s representative, he touted the occasion as a wonderful way to support distributors, make connections and stress the importance of continuing to present end-users with excellent goods that will make lasting impressions on their lives. Given that his employer is proud of its tariff-free identity, he and his colleagues figure to fare quite well in that final regard, especially as they hawk such items as the popular pet bandanas that he showed off.

“We’re fond of everything that is in our product line,” Adolph said, noting the attention that Cloth Promotions’ Turkish luxury scarf and cooling towels, among others, have earned. “Our pet bandanas fetch compliments, too, and that pun, if we’re talking about dogs, was definitely intended.” 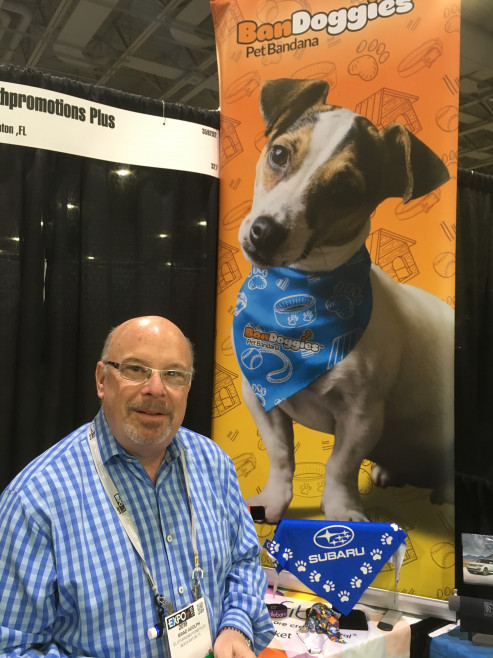 Bob Heintz, director of national sales for Terry Town, showed us around his employer's Expo East booth and pointed out some of their specialty towels. On display were also a few of the newer products, like the hooded beach towels for infants and toddlers, and a comforter blanket that was extremely cozy.

As for 2019 predictions, Heintz felt that their top-sellers will continue to be beach towels. “Our beach towels are definitely our staple at Terry Town, followed closely by our, I call them, ‘living room quality throw blankets,’” Heintz noted. 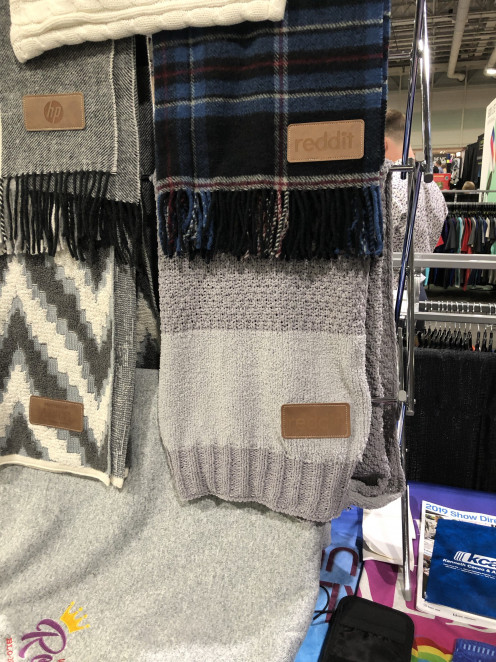 With a popular trend in retail being urban minimalism, according to director of key accounts Kyle Annable, Stormtech has come to enjoy issuing apparel goods that appeal to hipsters, millennials, Instagrammers and YouTubers. Through these subtle styles, the British Columbia-based company is building its already lauded profile, but he and his contemporaries are preparing to welcome a few more plaudits by introducing an element to their product line.

“We’re really looking to enhance our bag presence,” Annable said, noting that 20 bags will comprise this season’s offerings and 40 will appear next season to complement Stormtech’s apparel prestige. “A lot of people have not considered Stormtech for bags in the past. That will certainly change with our long-term product development geared toward bags.” 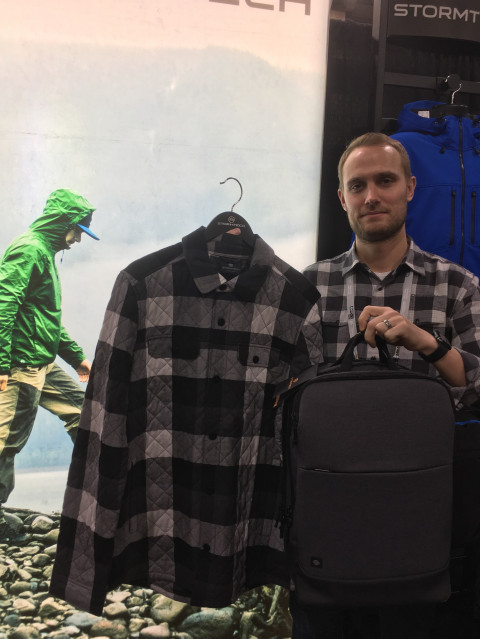 Over at Antigua Group, we talked with Jason Ford, national sales manager, about some of their top products and even some that are perfect for the summer heat, including the Tribute.

“It comes in men’s and women’s, it’s 100-percent polyester, Desert Dry ™, moisture-wicking product. [There’s] a nice, simple neckline for women, [it comes in] a lot of colors, a lot of sizing, it’s taken up very, very well. It’s a nice update to one of our basics.

Aside from the Tribute, the Sonar was another product that Ford liked and there’s one for both men and women. Although, the biggest difference was that the women’s version has a full zip compared to the men’s, which is a half zip. 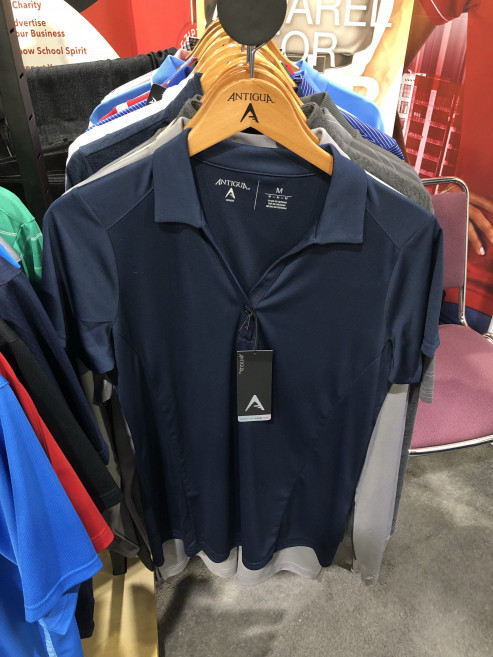 Fix the Biggest Bottlenecks in Your Art Department