Owing to its reputation as the biggest sporting event of the year, the Super Bowl always serves as an amazing setting for athletes to cement their legacies as legends. While the gridiron greats are planning and subsequently executing their strategies, counterfeiters are also looking to give fans, many of whom are unaware that they are the victims of dupes, a memorable experience by hawking their “goods.”

This year’s February 4 Minnesota matchup between the Philadelphia Eagles and New England Patriots in Super Bowl LII lived up to its hype as a potential clash for the ages, with the Birds raising their first Lombardi Trophy in a 41-33 upset victory, and the lawbreakers likewise sought distinction on that day. However, many would-be lucrative deals ended up dashed, as numerous arrests, confiscations and convictions occurred, leading authorities to wonder what to do with the bogus products. Yesterday, a Minnesota judge ceased nearly four months of speculation by earmarking them for distribution to charities. 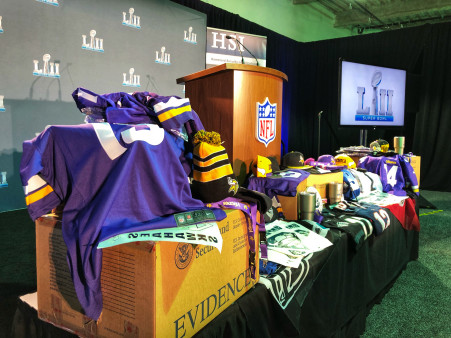 As reported by Promo Marketing, federal agents and Operation Team Player personnel found themselves pretty busy ahead of and during the championship tilt, and the National Football League, having partnered with the game’s combatants to obtain restraining and seizure orders against the peddlers, again found itself pondering what to do with the phony haul. Crafting a motion to have the merchandise go to charities, the league received great news thanks to Judge Daniel C. Moreno. A member of Minnesota’s Fourth Judicial District, he agreed with the entity’s petition to remove the items from storage and give them a justified existence through to-be-determined sites.

Now, there will undoubtedly be cynics who will balk at letting the products see the light of day, given their designation as knockoffs. But for those who want for something to hit them right in the feels, Moreno’s decision is a fitting example of good coming from bad. Since Minnesota will host July’s X Games and next year’s NCAA Division I Men’s Basketball Tournament Final Four, the judge might become a household name in the state, as we all know that counterfeiters will always ply their trade no matter the various consequences.