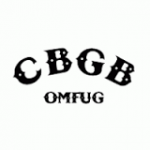 Though the New York music venue CBGB closed its doors in 2006, the famed concert hall's logo will live on through branded merchandise, including umbrellas, phone cases and baby apparel (for babies who were literally born to rock).

Politico's Alex Weprin reported that 315 Bowery Holdings LLC (which is the address of the original venue) filed for trademark protection for the venue.

Coming soon from the company that brought you CBGB in Newark Airport, CBGB onesies and umbrellas: pic.twitter.com/BaAJf1VxHz

CBGB was a springboard for many famous American music acts, such as The Ramones, Talking Heads and Blondie. Now, fans can celebrate the venue's history on their phones or shirts. There is also a CBGB-themed restaurant in Newark International Airport, but we're assuming there aren't too many punk acts playing there these days.