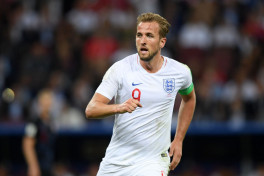 Fanatics agreed to a five-year deal with the English Football Association to sell merchandise for the England National Team. | Credit: Getty Images by Shaun Botterill

Fanatics has firmly solidified itself as one of the powerhouses of sports merchandise. This year alone the company got the license to produce NFL fan jerseys, opened retail shops inside 325 JCPenney locations, and signed a deal to create online merchandise and run online stores for a major Esports league. The latest in its takeover of sports merchandise comes from across the pond, where Fanatics has inked a five-year deal with the English Football Association (FA) to manufacture official merchandise.

"The encouraging performance of the England men's senior team at the World Cup this summer and the resulting feel-good factor felt by their fans around the world demonstrated that there is a strong bond between England and their supporters," Fanatics International president Steve Davis told Sports Pro. "We are determined to help fans feel closer to the team than ever before by improving the offering available to England supporters, including a wide range of merchandise that will be easy for fans to access, be that through the online store, through retail sites at Wembley or on the high street."

"Fanatics will transform the FA's ability to service the shopping demands of England fans all over the world," Dan Kiddle, the FA's head of partnerships, said. "With access to an unrivaled suite of e-commerce technology and world-class pedigree in delivery to match, we are very excited by our partnership with Fanatics and look forward to rolling out a much-improved retail offering."

It hasn't all been success for Fanatics in 2018, however. The company lost its contract with NASCAR, and was the subject of controversy after it was sued for racial discrimination and had to remove a T-shirt with an unintended double meaning.