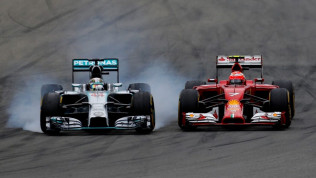 In a move to boost its brand, Formula One has signed a new partnership with merchandise juggernaut Fanatics. The unspecified agreement will give Fanatics the duty of reinvigorating Formula One’s merchandising strategy. As it turns out, the racing championship could use all the help it could get. Following the announcement of a rebrand, which included the release of a new logo, Formula One faced backlash and criticism from fans and drivers alike.

This move is beneficial for Fanatics as well. Having dominated the American sports merchandise market, the company has just recently begun an excursion into the international with the help of a $1 billion investment from Masayoshi Son of SoftBank Group Corp. It will certainly need the help of an internationally popular sport like Formula One if it is going to take its success abroad.

While the financial terms and length of the deal have not yet been released, it has been announced that Fanatics will be setting up trackside souvenir tents at Formula One events starting in the 2018 season.

The partnership calls to mind a 2015 deal between Fanatics and Nascar, which reportedly also began with a similar “superstore tent” partnership that eventually reverted to the stock car racing group’s original practice of selling merchandise in trailers. If the length of Nascar’s deal, 10 years, is any indication, then Formula One could be working with Fanatics for a long time to come.

In an interview with SportsPro, Sean Bratches, Formula One’s managing director of commercial operations, commented on the nature of the plan to have merchandise tents at race events. “You will be able to pick items up off a rack and see if it fits, then go into a queue with 15 to 20 registers,” he said. “And if you want to send it home, our partner DHL will be there to take care of it for you.”

This variety of purchasing and delivery options will appeal to fans, as it will give them the choice to have merchandise delivered rather than to have to carry it around with them at the event.

It will be interesting to see how this deal plays out for both brands, as both have a lot to gain and to prove here. Will Formula One be able to use Fanatics’ expertise in merchandising in order to convince fans and drivers of the viability of its rebranding effort? Will Fanatics be able to create merchandise that will appeal to an international audience after so much success in the vastly different American market? Time, of course, will tell, but the partnership of two brands that need each other such as these could prove to be equal parts intriguing and promising.

The 2018 Formula One season, which is set to begin in March with the Australian Grand Prix, will be the first major test of this deal. Stay tuned.