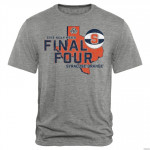 ThePostGame.com posted a look into Fanatics' warehouse, showing how the company produced Syracuse Final Four T-shirts in bulk in a short period of time.

Live from the @Fanatics warehouse, Syracuse (@Cuse_MBB) Final Four shirts are being printed in bulk.https://t.co/ECtcJpHbBq

On the other side, when teams, like Michigan State University, that many predicted to make it at least to the Final Four, get knocked out early on, it can impact merchandisers.

In East Lansing, Mich., home of Michigan State University, retail shops are anticipating a drop in business due to the Spartans' first-round loss.

"I would expect at least a 10 percent drop in business," Chad Freehauf, manager of Campus Corner in East Lansing told, The State News. "I can't put an exact figure on it, but we'll definitely lose some."

However, Mike Wylie, assistant manager at Michigan State University's student book store, told The State News that businesses shouldn't put all of their eggs in the Final Four basket.

Wylie might be on to something. While a "Cinderella" school making it further into the tournament bracket than the pundits anticipate can bring in big money for a school, experts say that it usually won't last.

Remember in 2013 when Florida Gulf Coast University (FGCU) shocked the sports world by making it to the Sweet 16 of the tournament? People who had otherwise never heard of the school were wearing "Dunk City" T-shirts. CBS News reported that applications to the university jumped 29.9 percent during the 2013-2014 school year, and sales of licensed merchandise grew 200 percent.

Next year, FGCU didn't make the tournament. This year, it lost in the first round. FGCU still is raising some money from licensed merchandise, but economists say that one flash-in-the-pan season is not a sustainable business model.