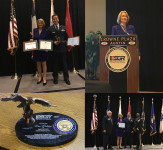 FastSigns International, Carrolton, Texas, has earned the Pro Patria Award, which the Texas Employer Support of the Guard and Reserve (TXESGR) awards annually. The committee bestowed the organization's highest honor on FastSigns International at its annual Employer Awards Dinner on April 15 in Austin, Texas.

Catherine Monson, president and CEO of FastSigns International; and Mark Jameson, executive vice president of franchise support and development, accepted the award at the dinner.

Stephen MacKenzie, business consultant and Air Force reservist from Indianapolis, nominated FastSigns International for the award after his recent deployment overseas. As recipient of the Pro Patria Award, FastSigns International demonstrated support to MacKenzie and his family through leadership and by adopting policies that support National Guard and reserve employees.

"It was a tremendous honor to be recognized for the support we provide National Guardsmen and reservists," Monson said. "We believe it's a part of our corporate responsibility to provide assistance to our active duty and veteran employees. We are so appreciative of Stephen MacKenzie for nominating us, and will continue to be committed to providing the same level of support and deep incentives we offer those in the FastSigns family who currently serve or have served in the U.S. military."

In addition to receiving the Pro Patria Award, FastSigns International is a finalist for the 2016 Secretary of Defense Employer Support Freedom Award (commonly referred to as the "Freedom Award"), which is the highest recognition the government presents to employers for their support of National Guard and reserve members. Recipients of this award will be announced in late May and a formal ceremony at the Pentagon will follow. FastSigns International is the only finalist located in Texas.

FastSigns International reported that more than 10 percent of its franchisees are current and former military veterans.

"We actively seek veterans as franchisees of FastSigns, because they typically have leadership experience, [and] possess a number of valued skills and management experience essential to successful franchise business ownership," Jameson said. "Veterans are disciplined, driven, self-motivated and natural leaders, making them perfectly suited for franchising."

BIC Graphic Donates $10,000 Worth of Promo Products for Teachers

Who's Buying Promotional Products? Some Ideas on Where to Look for Sales

Check Out These Promotional Shoes Apple Gave Employees in the 1990s