‘My Favorite Color Is Hitler’? Tote Decoration Reminds Us to Choose Fonts Carefully 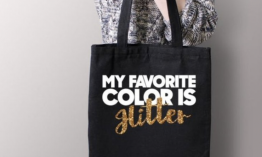 BelleChic and Quotable Life have avoided more controversy thanks to the reissue of this much-discussed tote. (Image via BelleChic)

Numerous companies have collected kudos for their creative representations (Baskin Robbins and The Hershey Company stand out to yours truly), but when entities decide on marketing approaches, some of their synapses refuse to fire, and we end up left with an embarrassing product. Looking to laud vibrant style through a tote declaring “My favorite color is glitter,” Quotable Life and BelleChic instead needed to fend off accusations of cultural insensitivity, as many consumers argued their font choice could lead people to believe the bag is commending Nazi dictator Adolf Hitler.

Twitter users gave the potential gaffe ample attention July 23 and 24, with BelleChic clarifying matters on the latter day and its industry companion updating the design to reflect that neither had any intention to cause confusion.

“While I realize that most of the social media buzz and commentary has been tongue-in-cheek, the type of abhorrent sentiment conveyed as part of the misinterpretation absolutely does not align with our company values, nor is it something we would ever want to encourage or support,” chief marketing officer Matt Mollen said of BelleChic’s embarrassment, adding that the holder, which it had listed on its website for more than a year, had not received any backlash until late last month.

The referenced commentary quite often failed to take the moral high ground, with many tweets abounding in puns on the Third Reich, the period stretching from 1933 through 1945, during which Hitler orchestrated not only World War II but also the Holocaust. Quotable Life acknowledged the latter tragedy through its own apology, with a representative stating that on account of the controversy that the tote, which more than 70 end-users purchased before its removal, has caused, his Georgia-situated employer will donate 300 percent of all accumulated proceeds from the discontinued container’s sales to the National Holocaust Museum.

Gripes about designs tend to lead many consumers to claim the questionable material is a direct attempt to test their observational skills. In other words, they hold that companies look to cause trouble through their creative output. With that in mind, one can definitely be of at least two minds with this incident. Is it an overt nod to Hitler, the man responsible for an untold number of deaths? Is it simply a reflection of poor inspections and brainstorming sessions among the design team members? Perhaps it is just an example of seeing-what-is-really-not-there, but the backlash was bountiful enough to inspire a correction, and therein lies the lesson.

Yes, there are definitely apparel presences that seem to thrive off avoiding convention (our own city’s Urban Outfitters has won such distinction), but most businesses simply want the harmless exchange of cash or credit for their goods. To accomplish that, they must be mindful of so many concepts, particularly fonts.

Tell us about your experiences. Have you ever encountered a design whose font choice(s) led you to push your glasses closer to your face, squint or cry foul?

Validation Is for Parking Receipts
Comments
The Top Lists