Certain circumstances can sometimes make a hard sell of the “’Tis the season to be jolly” sentiment, but no matter what is befalling them personally as fall says farewell and winter arrives, college football fans will laud the stretch between Dec. 16 and Jan. 8 as a temporary cure for their concerns. That span represents bowl season, through which eager collegiate teams will contest 40 games and gain seasonal clout for their schools. Thanks to the matchups’ overseers, brands and companies will be commending their efforts through gift packages that figure to make their experiences that much more enjoyable no matter the gridiron-based outcomes.

As the list of bowl games has grown over the years, I have often scratched my head over the names of some of the clashes, and this go-round finds me doing the same (I am looking right at you, Bad Boy Mowers Gasparilla Bowl and Cheribundi Tart Cherry Boca Raton Bowl). However, this occasion has me focusing more on the goodies that the players will receive, with bowls being quite creative in awarding up to $550 worth of endowments to as many as 125 participants per higher learning institution. The clubs, especially the quartet that comprises the College Football Playoff system, will definitely be looking to execute their strategies to perfection, and the benefactors will likewise look to be at the top of their game. 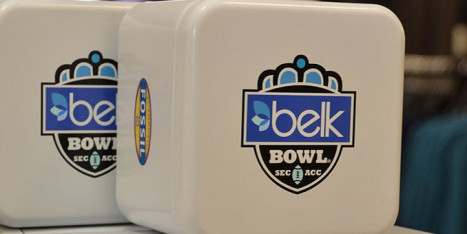 Fourteen bowl games will include the distribution of fossil watches, including the Belk Bowl matchup between Wake Forest and Texas A&M. (Image via nsjonline.com)

For the 12th-straight year, Sports Business Daily amassed a list of what organizing committees will be distributing to the teams, with Troy and North Texas being the initial recipients when they contest December 16’s R+L Carriers New Orleans Bowl. (That’s not quite a tongue twister, but I still dare you to say it five times fast.) Inspecting the roundup, I wished for a couple moments that my alma mater, Saint Joseph’s University, could even field a unit to vie for a bowl game invitation. In doing so, I further realized the power of promotional products and chose to pick a few athletes to envy.

All the rage in 2017, fidget spinners will definitely solidify New Mexico’s Land of Enchantment nickname December 16, as they will be among the eight (“Wow,” in my best Christopher Walken voice) offerings to Marshall and Colorado State performers in the Albuquerque-situated Gildan New Mexico Bowl. Fourteen tilts will involve the distribution of fossil watches, with many of the collegiates to receive the time markers through gift suites, and other technology-centric products, including headphones and speakers, will captivate the constituents as they prepare for their postseason duels.

Promo Marketing reported exactly a year ago today that the Quick Lane Bowl’s squads would receive life-sized Fathead decals in each participant’s likeness, and the Detroit-based game will replicate that nod to individuality in its package. That Duke-versus-Northern Illinois slate will also include a $175 Best Buy gift card, a gesture that had me nodding until I saw the Citrus Bowl—to be contested by Notre Dame and LSU—will give away $400 shopping trips to the store. It definitely pays to have an impressive pedigree, doesn’t it, fellows? The baseball fan in me (I know, I know, baseball has taken its bow for 2017) absolutely loved seeing that Iowa and Boston College will face off at Yankee Stadium in the New Era Pinstripe Bowl. Here’s hoping that Sports Business Daily’s mention of a “Variety of New Era products” comes to include these guaranteed hits.

Check out the full list of bowl game gifts here.