Because of four-straight losing seasons and three-consecutive last-place finishes, Cincinnati residents have had a rough run recently when rooting for the Reds. The diamond occupants dropped 372 games over those campaigns, further encouraging the fan base to yearn for a return to the glory days of the 1970s, when the Big Red Machine clubs tallied 953 wins and made four World Series trips, emerging victorious twice. Maybe this year will start to help the Reds to make their foes green with envy again, but even if the Queen City-based ballplayers occupy the cellar again, they should be able to tout June 19 as a memorable occasion, as that day will find the organization distributing Fiona the Hippopotamus bobbleheads.

The adored mammal, whom the Cincinnati Zoo feted over the weekend ahead of her first birthday tomorrow, has captivated many around the nation, going from a prematurely born and underweight addition whose health complications made zoo personnel severely worry about her welfare to a thriving presence who tips the scales at 550 pounds. Having already proven a promotional products force, she will now receive reverence from the Reds, who hope to be in the National League Central race when the Detroit Tigers visit Great American Ball Park for their interleague series tussle. 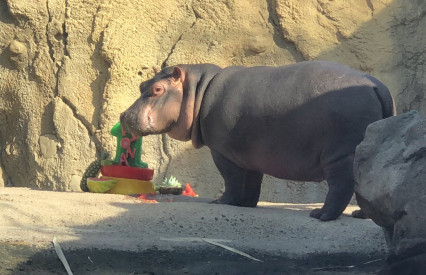 Fiona the Hippopotamus will gain even more renown when the Cincinnati Reds distribute a bobblehead in her likeness. | Credit: The Cincinnati Zoo

Given that the game will occur nearly five months after her inaugural birthday, I found myself wishing that Cincinnati had a professional basketball team or that the city’s Bengals had qualified for the National Football League’s playoffs and hosted a clash so as to have crafted a more timely promotion. But, at the risk of sounding like a killjoy, I will commend the Reds. The brass is obviously looking to fill the stands, and if the on-field product, led by five-time All-Star and 2010 NL MVP Joey Votto, does not inspire much enthusiasm over the franchise’s 81-game home slate, Fiona figures to be a hip means to help owner Bob Castellini please the masses, but only those who secure a special ticket.

In honor of Fiona's birthday, be sure to order the Fiona theme ticket package that includes your ticket to the June 19 game against the Tigers and this Fiona bobblehead! Packages are limited and start at $25!

The evening will present a nice break from the norm, as most bobblehead promotions at baseball games center on America’s pastime. This occasion simply offers a chance to succumb to Fiona Fever. Maybe the Reds will also emerge victorious that night. If they do, could Fiona inspire even more promos in Cincinnati and become the queen of the Queen City? Like the hippo’s hunger for tasty grub, my curiosity knows no limits. How I wish they could play ball now. Happy birthday, Fiona!