Since her premature birth last January, a hippopotamus named Fiona has proven a literal example of animal magnetism, with the mammal’s presence at the Cincinnati Zoo helping the location to draw large crowds as staffers tend to her welfare and increase enthusiasm for her species. The Ohio destination has been a considerable beneficiary of the nearly year-old occupant’s “aww” factor and has generated around $480,000 in merchandise sales thanks to her presence. 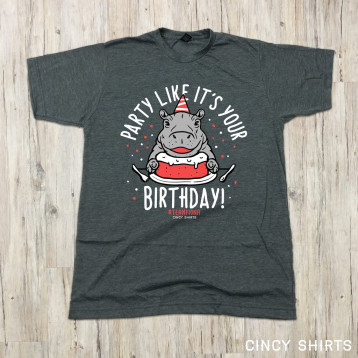 Fiona the Hippopotamus is 16 days away from her first birthday. | Credit: Cincy Shirts

The estimation, which originated through a Cincinnati Inquirer report, could, in actuality, come in at closer to $350,000, per a comment from zoo spokeswoman Michelle Curley, but even if one were to use those figures as a range (granted, the gulf is pretty sizable), the revenue has surely enabled the space to make a splash. The publication had run its tally based on outreach to companies holding merchandising agreements with the zoo, learning from them that they had helped to haw goodies such as beer, books, clothing, drinkware, playing cards, Christmas ornaments and wrapping paper (’twas just the season, after all!). Owing to her early arrival, Fiona, as reported by a local media outlet, weighed 29 lbs., around 25 fewer than the lowest recorded weight for her kind. That necessitated giving attention to numerous health concerns, with the nation’s growing interest in her condition even prompting the zoo to produce an August Facebook show for her.

Given that overseers will celebrate her birthday Jan. 24, the timing of the merchandise money pool’s revelation, whether one goes by the paper’s numbers or the zoo’s, is impeccable, as the impending blowout will definitely find personnel marketing the existing products and a few new ones, with one of its business partners set to unveil Chunky Chunky Hippo ice cream (I absolutely love the take on the tabletop game Hungry Hungry Hippos, folks!) exactly a week before the birthday bash, with local supermarkets set to sell it. As it generates more funds through the regard that Fiona has achieved, the zoo will likely continue to apply a huge chunk of the proceeds to her care and well-being, notably the acquisition of medical supplies and the construction of pools. It will also probably further what Curley tabbed the “enrichment of the hippos” also under its care.

The in-the-works festivities and the associated marketing plans will make workers especially vigilant, as the zoo last year contended with the unofficial selling of #TeamFiona T-shirts, and keeping bogus goods away from genuine admirers of the animal will offer a valuable lesson. Perhaps, though, the bigger return from all of this could be that compassion and, dare we say, cuteness can help many marketing campaign supervisors not only to dip their toes in the waters of potential success but fully immerse themselves in the pursuit of liquid assets. Will Fiona Fever extend beyond 2018, or will any hope for sustained attention be dead in the water shortly? If her birthday celebration goes swimmingly, one never knows.