First-Class Travelers Steal a Ton of Branded Stuff, and Airlines Have Embraced It

There are plenty of freebies in air travel—snacks, earbuds, the occasional adult beverage on international flights. Airlines use plenty of branded gear, as well. Think of the blankets, pillows, napkins, etc.

As you could imagine (or have even seen firsthand) the more upscale your aviation experience, the more upscale the items tend to be. For airlines like Emirates and Etihad, some of their branded items are so popular, people have been taking them off the planes.

The International Business Times reported that Virgin Airlines passengers have made off with about 1,700 blankets since the start of 2018, and have stolen so many of the airline's "jet engine" salt and pepper shakers that Virgin has leaned into the issue, branding them with the slogan "Pinched from Virgin Atlantic" along with the company logo.

That's after the airline lost almost 27,000 thousand sets of them over the last year.

British Airways offers blankets with satin trim and mattress covers for long flights, which have been stolen en masse by customers.

"I'm definitely picky these days," a customer who's taken three of the blankets told the Wall Street Journal. "The quality of the stuff now is beautiful. It really makes it worthwhile."

If customers were to walk off of a United flight with a pair of headphones or, at most, one of the small fleece blankets you get on a long overnight flight, United wouldn't take much of a financial hit.

For a company like Virgin, replacing the blankets or salt and pepper shakers is a mild annoyance, not a major problem. The company's vice president of customer experience told the Wall Street Journal that the theft is "flattering and potentially good for business."

And the problem for companies like Etihad and Emirates isn't that the thefts takes a larger chunk out of profit margins as the branded gear becomes more upscale and expensive. The airline can afford it. The issue is that, since these are customers paying for the more luxurious flights, the companies can't do much about it for fear of upsetting top customers.

According to the Wall Street Journal, premium cabins like first and business class only account for 5.5 percent of passengers, but 30 percent of total revenue.

What that means is that going after loyal customers for taking a blanket would potentially cause them to take their business elsewhere.

"Airlines want to ensure they have made enough of an investment in their most valuable customers," Scot Hornik, a partner at consulting firm Oliver Wyman, told the Wall Street Journal.

For United Airlines, staff members are instructed to know what items passengers can and can't take. According to a spokesperson for the company, crew members won't stop customers from taking Tumi amenity kits, but they will tell them to leave the designer silverware and dishes.

"Most people, if they're called out on it, just put it back," the spokesperson told The Wall Street Journal. "It's just that anytime you've got to tell people they're doing something quote-unquote wrong, they're some apprehension."

Some airline customers say that crew members on other airlines have been fairly accommodating of their theft, with one Etihad flyer saying a crew member helped her take one of the blankets she had in her "residence" suite.

"[Theft] has gotten way worse as the products have gotten better," a customer told the Wall Street Journal.

As the quality of products and the corresponding theft increases, there's also an increasing demand from non-flyers.

A quick eBay search showed that Etihad first class velvet blankets go for upward of $100. Even the blankets economy flyers get are going for around $25. 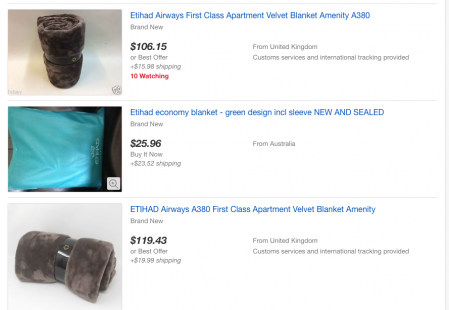 Those cute little Virgin Airlines salt and pepper shakers are going for about $10 on average, and sometimes as high as almost $30.

The real lesson here is that it's vital to keep your customers happy. If that means allowing them to steal hundreds of dollars in blankets and other items to keep them coming back, then viewing it as a marketing expense, as these airlines seem to be doing, may be the best bet.