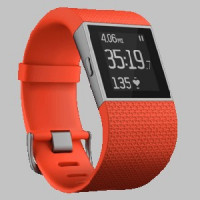 A recent study has found the Fitbit Surge's PurePulse heart-rate tracking technology to be 'highly inaccurate.' (Image via Fitbit)

Fitbits have saved lives and detected lies and may someday advance science, but a new study found Fitbit's heart-rate trackers in multiple models of the devices to be unreliable.

The catch, however, is the law firm behind a lawsuit against Fitbit funded the study that researchers at the California State Polytechnic University, Pomona, Calif., conducted. That law firm, Lieff Cabraser Heimann & Bernstein, filed an amended lawsuit that included the study last week. The lawsuit targets three Fitbit models that include the PurePulse technology—Blaze, Charge HR and Surge.

Researchers tested the heart rates of 43 healthy adults—22 men and 21 women—with Fitbit's PurePulse heart-rate monitor by having participants wear Fitbit's Surge and Charge HR bands on each wrist, according to the study. They also were hooked up to BioHarness devices to record their hearts' rhythms via electrocardiograms (ECGs) that could be compared against Fitbit data.

"The Fitbit PurePulse trackers do not provide a valid measure of the users’ heart rates and cannot be used to provide a meaningful estimate of a user’s heart rate, particularly during moderate- to high-intensity exercise," researchers concluded, according to the study.

Fitbit has called the study "biased," saying it lacked "scientific rigor," according to CNBC.

It was paid for by plaintiffs’ lawyers who are suing Fitbit, and was conducted with a consumer-grade electrocardiogram—not a true clinical device, as implied by the plaintiffs’ lawyers. Furthermore, there is no evidence the device used in the purported ‘study’ was tested for accuracy.

Fitbit’s research team rigorously researched and developed PurePulse technology for three years prior to introducing it to market and continues to conduct extensive internal studies to test the features of our products. Fitbit Charge HR is the No. 1 selling fitness tracker on the market, and is embraced by millions of consumers around the globe.

In response, Jonathan Selbin, an attorney on the case, told Forbes:

We are not arguing that it is a medical device. I think that is irrelevant. This is about the way they market it and that they charge a premium for the heart-rate monitor, but it’s not giving a meaningful measurement.

Other studies on its heart-rate technology's performance have been mixed. In January, when the lawsuit was filed originally, Consumer Reports retested the devices, but found them to be accurate, with a typical variance of only three beats per minute. In February, Ball State University in Indiana and journalists at a local NBC-affiliate found an average heart-rate error of 14 percent. Researchers said that the margin for error for heart rate should be less than 5 percent, or five beats per minute. Missing the mark by 20 or more beats per minute could prove dangerous, especially for those with a high risk of heart disease.

Time noted that the accuracy of heart beat-measuring, wrist-worn devices has been questioned previously, noting a 2014 CNET testing that detailed why heart-rate activity might be difficult to capture:

This is largely because it’s difficult to capture precise heart-rate metrics from the wrist. Medical-grade devices, typically worn around the chest, measure electrical impulses that travel through the heart, while gadgets like the Fitbit and Apple Watch shine a light through the wearer’s skin to detect blood activity in the wrist to measure one’s heart rate.

Our 5 Favorite Promotional Products of the Week: Xbox Suitcases, Warheads Apparel and More