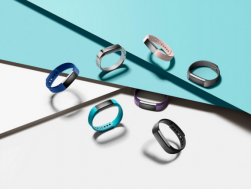 In an effort to become a more stylish fitness tracker, Fitbit has released the modular Alta bracelet. According to Wired, the $130 wearable features a more discreet stainless-steel band, available in black, blue, teal or plum. And for $60 more, buyers can spring for a genuine leather band.

The Alta still retains its functionality as a fitness tracker with activity and sleep tracking, exercise recognition, and alerts.

The Alta announcement comes on the heels of Fitbit's reveal of the Blaze, a smartwatch-type tracker featuring interchangeable bands. Seemingly, the Alta is more of an effort toward fashion than functionality with Fitbit hoping to convert prospective users.

Could 'Convertible' Apparel Be the Next Big Thing in Promo?
Comments
The Top Lists