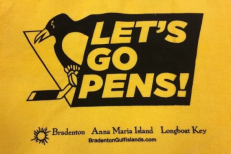 Sports fans can be brutal. Have you ever showed up to a game wearing the away team's colors? You're likely to be on the receiving end of some glares (or worse). So, you can imagine how Tampa Bay Lightning fans felt when they saw that Visit Bradenton, a hospitality account for the Bradenton, Fla., Gulf Islands, sponsored the Pittsburgh Penguins' rally towels.

According to Raw Charge, the Penguins' social media account twisted the knife even further by tweeting, "We're gold rushing into the Eastern Conference Final! Shoutout to @VisitBradenton for the rally towels!" with a picture of two fans holding the flags in front of the Penguins' home stadium.

Unfortunately, it seems that Visit Bradenton totally missed the point (or wasn't aware that the Lightning was about to face off against the Penguins), because it tweeted back, "You're welcome! 🙂 Have fun!"

Naturally, as sports fans are wont to do, Lightning fans got super-angry and took to Twitter, using the hashtag #BoycottBradenton.

Visit Bradenton eventually released a press release explaining the mix-up and how it justifies advertising with the enemy:

"It's a great way to get our brand in front of a demographic that meshes with our visitor profile," Elliot Falcione, executive director of the Bradenton Area Convention and Visitors Bureau, said in the statement. "It's about economic development for our region, the entire region, which includes Tampa."

This wasn't the only time the Penguins trolled the Lightning during this series. The Tampa Bay Times reported that the Lightning's Amalie Arena has a policy to keep opposing teams' gear out of certain areas during the playoffs. Any fans wearing the Penguins' black and gold will be told to put on neutral colors.

But, as Falcione explained, many Pittsburgh residents like to head down to Florida, so what would they wear during the game? One Pittsburgh-based designer created a T-shirt that, in the Lightning's color scheme, says, "This is not a PGH Penguins T-shirt," with "this is not a" and "T-shirt" in tiny font.

As Franklin Roosevelt once said: "Sports is the very fiber of all we stand for. It keeps our spirits alive."

Penguins and Lightning fans certainly showed they have plenty of spirit. On the bright side, at least nobody threw anything onto the ice.