Fonderie 47, an organization that works to address the problems of assault rifles in Africa, has teamed up with Cross to promote the destruction of AK-47 assault rifles on the continent.

"The AK-47 is a mass-produced, industrial object," Peter Thum, CEO of Fonderie 47, told Quill & Pad. "This weapon has spread around the world as a tool for state strategy, political ideology and because of an accident of history as an open-source platform that allows anyone to produce their own version of the gun—and over 20 countries have. Since 1947, some 100 million AK-47-type weapons and variants have been produced." 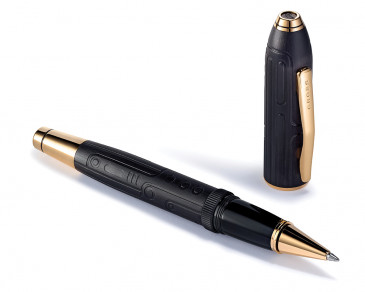 The Peerless Fonderie 4 Collector's Edition pen is made with components from melted-down AK-47 rifles. (Image via Fonderie 47)

The reason so many countries are able to produce AK-47 rifles is that it was created in the communist Soviet Union with no patent protection, according to Forbes.

So far, Fonderie 47 has worked to destroy more than 50,000 of those weapons in Africa.

The Peerless Fonderie 47 Collector's Edition pen, which retails for $350, incorporates steel from melted-down AK-47 rifles into its design, and its cap features the serial number of the gun taken out of circulation to create the specific pen.