Foo Fighters Turn London Pub Into Merch Store Because They Can

Dave Grohl, frontman of the Foo Fighters and formerly the drummer of Nirvana, puts on the appearance of being one of the world's few remaining "rock stars" in the sense that he does, in fact, play rock music and just about everything he does is larger than life.

When he broke his leg on stage, he continued the tour in a giant, "Game of Thrones"-influenced … um … throne. He made a whole documentary series chronicling the band recording an album all over the country by shipping their recording equipment all across the dang continent. They've crashed parades in disguise, they've taken over MTV programming for 24-hour spans, and did I mention he played in Nirvana before he did this whole thing? He's kind of like Animal from The Muppets if he had some business savvy and an excellent marketing team.

For the Foos' latest release, "Concrete and Gold," Grohl and co. have created a pop-up merchandise shop (as many musicians are wont to do), but he did it in the form of a functional pub in London, because, for Grohl and co., the limitations of London real estate is no object, and selling promotional merch in a pub is way more fun than in a tent outside of a storefront or parking lot.

And isn't that what rockin' is really all about?

Enclosed in the East London pub, aptly named the Foo Fighters Arms, is (obviously) a functioning pub, but with decorations portraying the band members as neoclassical portraits. Those are for sale, too. 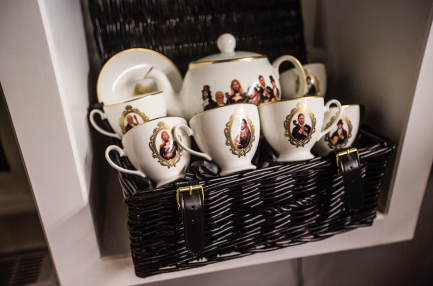 In the pop-up shop itself, the band is slinging all kinds of merchandise, like teapots featuring aforementioned portraits (a set of which will set you back about $337, according to NME), barware, coffee mugs, and then usual rock memorabilia like T-shirts and hoodies.

With this, the Foo Fighters show that there are always fresh ways to market a brand. Just when you think you've seen it all, something like a fully functioning bar, complete with printed menu items and wall decorations pops up in East London. For promotional products professionals, this is a great example of going above and beyond when it comes to promoting a brand.

There's a reason the Foo Fighters are as big as they are.