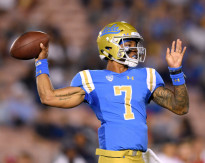 Credit: Getty Images by Harry How

It might be college football season, but there's a competition taking place off the field, and that's on apparel deals. Forbes recently revealed the top 10 most valuable college apparel deals, and UCLA is at the top of the list with its lucrative Under Armour apparel contract.

It's a surprising spot for UCLA, who isn't a "premier collegiate athletic program" by Forbes' standards. The article pointed to the apparel contract boom of three years ago, in which UCLA, Texas and Michigan all landed big contracts. These days, apparel manufacturers are much less interested in handing out big-time contracts to schools that aren't major sports contenders.

“We have big competitors who are good at what they do,” Under Armour CEO Kevin Plank told the Portland Business Journal earlier this year. “We’re big enough that we can do any one of these deals, but we can’t do them all.”

Forbes' top-ten list used the average annual value of product and cash allowance to make its calculations. The product allotments are also measured at wholesale prices, since universities purchase large amounts of apparel at wholesale.

Here's the list, in reverse order for maximum suspense!

10. Auburn - Auburn has a contract with Under Armour, and an average annual value of $5.86 million.

9. Wisconsin - Big Ten school Wisconsin has a contract with Under Armour, and an average value of $6.8 million.

8. Ohio State - THE Ohio State University signed with Nike for an apparel contract that lasts from 2018 to 2033. The average annual value is $6.32 million.

2. Louisville - ACC conference school Louisville has a contract with Adidas until 2028. The average annual value is $10.66 million.

1. UCLA - As previously mentioned, Pac-12 school UCLA has the top spot with an average annual value of $12.76 million.