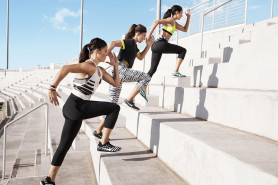 With athleisure and fast fashion taking over in 2017, we were curious to see who would top Forbes' Global 2000 list for apparel. For 2017, Christian Dior, Nike and Inditex continued to hold their spots in the top three for the world's largest and most valuable public companies.

The top apparel companies are measured by a composite score of revenues, profits, assets and market value. As for the other apparel companies that made the list, 28 companies received rankings, including luxury brands like Hermes, Prada, Burberry, Coach, Macy's and Nordstrom.

As previously mentioned, Christian Dior claimed the top spot with $43.6 billion in sales. Nike earned the No. 2 spot with sales of $33.8 billion, perhaps thanks to celebrity endorsements from Michael Jordan, Serena Williams and LeBron James. Finally, Inditex, the parent company of Zara, raked in $25.7 billion in sales, earning it the No. 3 spot.

TJ Maxx and Marshall's earned spots further down the list.

For the promotional apparel world, these top rankings could mean a few things. First, athleisure and athletic apparel are here to stay. With more and more consumers gravitating toward comfortable styles that transition from street-wear to gym-wear, it's important to integrate moisture-wicking, fashion-forward looks into your apparel lineup. Additionally, luxury brands continue to dominate the apparel market, which means end-users are always willing to pay more for an upscale experience.