Ford got a lot of people excited when it announced the redesigned and updated Ford Bronco and Ford Bronco Sport, which sort of launders its predecessor’s, uh, difficult reputation with some cool color schemes and features.

According to Detroit News, Ford has received 125,000 Bronco orders already. But buyers have been frustrated by production delays (the global supply chain is a mess, if you haven't heard), and Ford is trying to keep them satisfied by offering vouchers that they can redeem for branded merchandise, free maintenance and other perks.

According to Cars Direct, Ford sent letters to dealers at the beginning of September to announce “Bronco Satisfaction Funds,” to allow dealers to appease unhappy customers. Those dealers are given up to $1,000 to distribute to reservation-holders through next June.

Ford doesn’t want that 1,000 bucks to be thought of as a price rebate, though. It’s explicitly for spending on something, whether that’s future maintenance or branded merchandise, of which there is plenty on the Ford site. 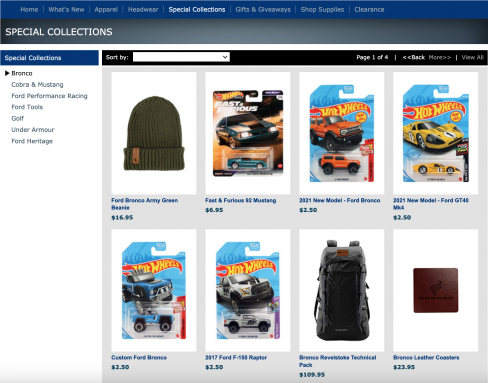 Ford released a whole line of Bronco-specific merchandise on its ShopFordGear.com e-commerce platform. This includes things like keychains, hats, towels, water bottles, blankets, backpacks, wagons, hammocks, coolers, clocks and an ugly sweater that is on clearance.

Whether that's enough to make up for delays in production remains to be seen. But, it speaks to the power of promotional products that Ford feels confident that a little shopping spree could be enough to garner goodwill.

It's an interesting strategy with some nice potential benefits for promo. There are a lot of car dealerships in the U.S., and most of them are having similar issues with inventory. If others go this route, that's more branded merchandise opportunity from the automotive industry.