While protestors fought the development of the Dakota Access Pipeline at the Standing Rock Reservaction in North Dakota, some Facebook pages tried to cash in on the movement by selling stolen T-shirt designs and fooling consumers into believing that their money would go toward the protest effort.

BuzzFeed reported that the owners of the pages, many based overseas, in places such as Vietnam and Kosovo, are generating money or funneling traffic to ad-filled websites that have nothing to do with the cause.

"They're just capitalizing on struggle—it's really crazy," Jared Yazze, Navajo owner of Oxdx, an Arizona-based apparel company, told BuzzFeed. "When they use my models, I think that makes me the most angry."

Another Native American artist told Buzzfeed that she's seen her designs altered slightly and sold without her consent.

Buzzfeed tracked one particular page called "Like If You Love Native Americans," which edits photos to look like big-name celebrities, like Dwayne "The Rock" Johnson, Johnny Depp and Mark Wahlberg, are wearing the T-shirts, but there's no evidence that the owners donated any money to the protest effort. 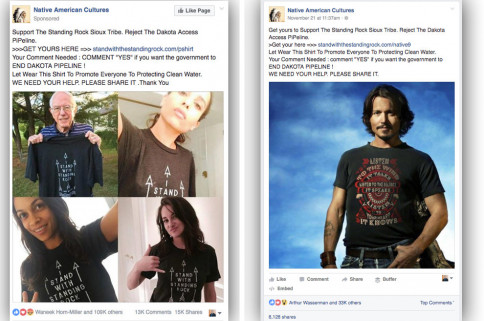 They found another page, "Wolves in Native American Culture," claimed to be based in Michigan, but later disclosed that it was based in Vietnam, meaning the owners used a fake name for the account as well. When asked about counterfeit merchandise, the owner responded: "No steal their work. I am an affiliate marketer search designs on that site an [sic] sell."

It's reminiscent of the scams we have seen in the promotional products industry, where overseas scammers usually are identified by poor English.