Forever 21 In Trouble Over Stealing Designs

It's starting to feel like a real life "Groundhog Day," because we know we've heard this one before. A clothing brand is accusing Forever 21 of stealing its activewear styles, and we can't say we're surprised. Previously, the retailer came under fire for stealing this design, this design, and the list goes on and on.

However, that doesn't make this any better. And, with so many accusations, it's becoming more difficult for the company to fake ignorance. According to Brit+Co, popular activewear brand Alala says Forever 21 ripped off its activewear designs.

We'll let you be the judge: 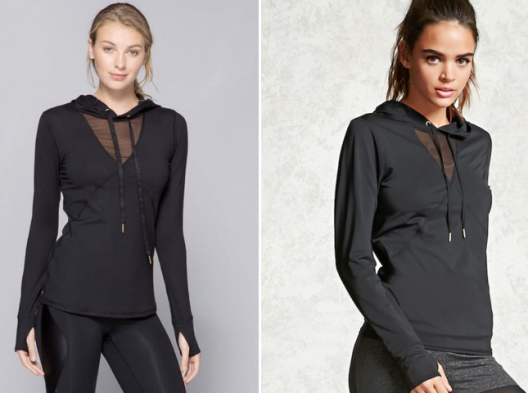 Unfortunately, copyright laws do not protect fashion (unless you're Adidas), so there's not much that these brands can do to protect their designs.

Ironically, Forever 21 is openly admitting it wants to copy one brand's famous design. According to The Fashion Law, it is fighting back against Adidas' trademark infringement suit pertaining to its three-stripe design.

Adidas has threatened to sue Forever 21 over its use of stripes on six apparel items, but the retailer is seeking a declaration from the court that its two-stripe design does not infringe on Adidas' trademark.

“Tired of operating with a cloud over its head with regard to its right to design and sell clothing items bearing ornamental/decorative stripes, and unwilling to stop doing something it has every right to do and pay a bully to leave it alone, Forever 21 has decided that enough is enough," Forever 21 stated, according to The Fashion Law. "Forever 21 is not infringing any Adidas trademark and has not breached any agreements with Adidas. This matter is ripe for a declaratory judgment.”

What do you think of this court case? Is it fair that Forever 21 steals other brands' designs and expects a court to vote in its favor on the Adidas trademark?