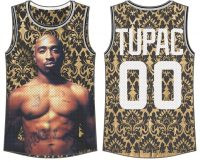 Photographer Danny Clinch filed a lawsuit to counter the use of his work in apparel honoring slain rapper Tupac Shakur (Image via Joel L. Hecker, Esq.)

On Sept. 15, 1996, two days after his death, Death Row Records and Interscope Records released “I Ain’t Mad at Cha,” the sixth single from Tupac Shakur’s acclaimed “All Eyez on Me” album. The five-minute track finds the rapper pardoning the parties who belittled him as a youth and a burgeoning performer, with successful chart placement being a posthumous component of his legacy. Photographer Danny Clinch admired Shakur’s persona, but he cannot mimic the deceased deliverer’s forgiving nature with respect to his own artistic output, as he is claiming Forever 21 and Urban Outfitters illegally used his images of the pioneer to peddle apparel.

The lawsuit lumps the retail giants with Bioworld Merchandising, Planet Productions and Amaru/AWA Merchandising, the final defendant being the company tasked with licensing Shakur-centric merchandise, and contends that despite Clinch having held copyrights on the pictures for 15 years, the quintet did not consult him. The in-question depictions date back to 1993 and 1996, with Clinch capturing the figure for Rolling Stone. Though litigation has just begun, the controversy’s roots, so says the legal document, stretch back to 2012.

Clinch, whose work has also appeared in The New Yorker and Vanity Fair, among others, contends Amaru and Planet Productions, established a license agreement that would let the latter use various shots of Shakur, including his handiwork. With Planet Productions' authorization, Bioworld produced T-shirts that eventually, in part, became available through the aforementioned sellers. Ample sources have documented that Forever 21 and Urban Outfitters, headquartered not far from Promo Marketing in The Philadelphia Navy Yard, have faced rebuke for skirting the proper means to hawk items and for putting out questionable garments, so the potential infringement could prove another example of the school of thought that says companies can never fully function without a touch of drama. In this case, they and their co-defendants, according to the May 31-filed lawsuit, “deliberately and willfully copied, displayed, distributed and sold the copyrighted photographs on such infringing T-shirts and perhaps other apparel” minus Clinch’s authorization, knowledge or consent.

Since his death, at only 25 years old, Shakur has received considerable acclaim, including recent enshrinement in the Rock and Roll Hall of Fame. With worldwide album sales having hit 75 million as of the start of 2016, he remains a source of inspiration, hence the launch of the possibly unjustified apparel, whose remaining inventory Clinch wants destroyed. He is also seeking $600,000 in damages and wishes for the court to keep the defendants from further using the debated material. If he succeeds in securing compensation, who out there feels the plaintiff might find himself compelled to tell the vanquished opposition to “Keep Ya Head Up”?