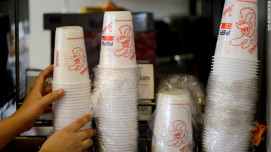 According to CNN, the new law requires all disposable table items to be made from 50 percent biologically sourced materials that users can compost at home by January 2020. In 2025, the number will rise to 60 percent.

French people throw away 150 single-use cups every second, totaling 4.73 billion per year. CNN reported that only 1 percent of that number is recycled, mostly due to the inclusion of polypropylene and polystyrene in the cups.

While the new law has environmental benefits, not everyone is cheering.

Pack2GoEurope, an association that represents the country's food-packaging manufacturers, claimed that the law violates European Union law on free movement of goods.

"Finding a package that meets the really critical food hygiene requirements that consumers want, that can also be composted in a domestic composter … right now they don't exist," Eamonn Bates, secretary general of Pack2GoEurope, said, according to CNN. "My members are not against bio-plastics or new products. But the industry does oppose them being imposed for certain applications, especially when the life-cycle analysis shows that here is no environmental basis for doing so."

The new law is the brainchild of Ségolène Royal, French minister for ecology, sustainable development and energy. She wants to cut landfill waste in half by 2025 and reduce greenhouse emissions by 40 percent by 2030 compared to 1990 levels, according to CNN.