A shopper at an Arizona Walmart found a surprise in a recently purchased purse—a letter. The letter claimed to be from a "prisoner" in China who works at a sweatshop, and it detailed the harsh conditions for workers, according to Huffington Post.

The writer said inmates are forced to work 14-hour days, those who don't finish their work are beaten or don't get food, and that they're treated worse than animals. 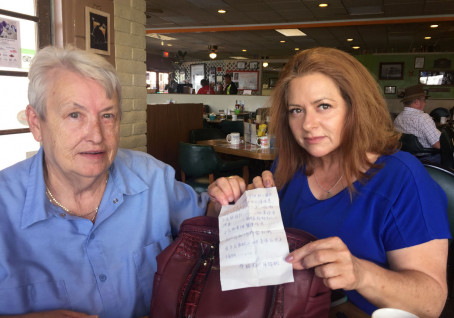 A Walmart shopper found a note in her purse purporting to be by a Chinese factory worker. (Image via the Arizona Daily Star)

"Being a prisoner in China is even worse than being a horse, cow, sheep, pig or dog in the U.S.," the letter read.

Laura Wallace, the daughter-in-law of the woman who found the note, said she wanted to spread the word on the note's message.

“I don’t have the means or the access to help in any way," she told local Tucson station KVOA. "So I think this was my way of putting in my two cents. I don’t want this to be an attack on any store ... That’s not the answer. This is happening at all kinds of places and people just probably don’t know.”

In response, Walmart issued a statement:

“We care that our products are sourced responsibly and transparently, and we take allegations like this seriously,” wrote Ragan Dickens, Walmart’s director of national media relations, in an email to Huffington Post. “With the limited information we now have, it is difficult to verify the letter’s authenticity.”

While sources cannot currently confirm whether this is fake or not, it doesn't bode well for Walmart. The retailer has been accused of using slave labor in the past, and this would demonstrate the company has failed to clean up its act.