If you’re not familiar with the Proud Boys, it’s far-right organization that describes itself as a “Western chauvinist” group. Their members are known for wearing black and yellow Fred Perry polo shirts, typically seen at rallies or protests, and have been involved in multiple violent altercations with other protestors or groups.

Due to their classification by the Southern Poverty Law Center and outlets such such as NPR as a hate group and as “hard-core white supremacists” by the Anti-Defamation League, Fred Perry decided enough was enough, and opted to stop making the now infamous polo shirt.

“If you see any Proud Boys materials or products featuring our Laurel Wreath or any Black/Yellow/Yellow related items, they have absolutely nothing to do with us,” Fred Perry said in a statement.

Fred Perry does not support and is in no way affiliated with the Proud Boys. Read our statement here.

The Fred Perry shirt is a piece of British subcultural uniform, adopted by various groups of people who recognize their own values in what it stands for. We are proud of its lineage and what the Laurel Wreath has represented for over 65 years: inclusivity, diversity and independence. The Black/Yellow/Yellow twin tipped shirt has been an important part of that uniform since its introduction in the late 70s, and has been adopted generation after generation by various subcultures, without prejudice.

Despite its lineage, we have seen that the Black/Yellow/Yellow twin tipped shirt is taking on a new and very different meaning in North America as a result of its association with the Proud Boys. That association is something we must do our best to end. We therefore made the decision to stop selling the Black/Yellow/Yellow twin tipped shirt in the U.S. from September 2019, and we will not sell it there or in Canada again until we’re satisfied that its association with the Proud Boys has ended.

Looking to distance itself completely from the Proud Boys, Fred Perry wants to keep its name associated with tennis and nothing else. 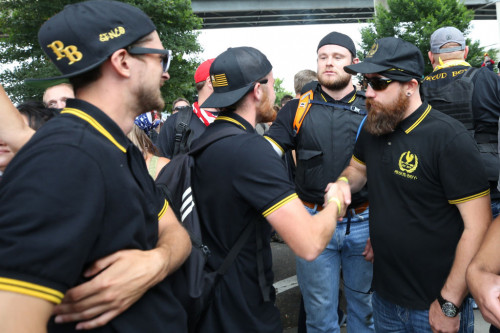 “Fred was the son of a working class socialist MP who became world tennis champion at a time when tennis was an elitist sport,” Fred Perry chairman John Flynn previously said in 2017 when asked about the group’s penchant for Fred Perry polos. “He started a business with a Jewish businessman from Eastern Europe. No, we don’t support the ideals or the group that you speak of. It is counter to our beliefs.”

Although the case here is more extreme, it’s sort of similar to how Patagonia became more particular about which companies could use its apparel for corporate uniforms or branded merchandise, looking to distance itself from companies whose ethics run counter to its own, like Silicon Valley tech and venture capital.

Still, the Proud Boys are going to have more apparel opportunities even without Fred Perry, after a quote from last night’s first Presidential Debate in which President Trump responded to a question about denouncing far-right extremism by telling the Proud Boys to “stand back and stand by.”

According to Newsweek, there are already multiple T-shirts for sale using the quote, such as one posted by Proud Boys leader Joe Biggs that says “Stand Back Stand By,” and another for sale that reads “Proud Boys, stand back and stand by.”

Now you can trade a MAGA Hat or T-shirt for one of @realDonaldTrump proud boys pic.twitter.com/YNZo7l1FVy

The design above plays on the Fred Perry logo and Black/Yellow/Yellow color scheme, so there’s a real chance Fred Perry decides enough is truly enough and takes legal action against the use of its logo in this context.