Fully Promoted, West Palm Beach, Florida, recently celebrated the success of its Canadian franchisees and revved up the excitement for an even better year ahead at its first-ever Canadian National Conference. Sixty-five franchisees, corporate employees and vendors attended the Fully Promoted Canada Expo held in Niagara Falls.

"It was a great opportunity to cross-pollinate ideas, increase productivity and inspire innovation," said Yousuf Sandeela, CEO of Fully Promoted Canada and the brand's Canadian Master Licensee, franchisor of all 29 Fully Promoted franchises there. "We've had a phenomenal year and we wanted to honor our franchisees' achievements. While we celebrate our successes, we must also capitalize on evolving industry trends to make sure we become part of the change that will define the industry in the years to come and further strengthen our competitive advantage."

In less than a year, since September 2021, Fully Promoted Canada has grown from 21 to 29 individually owned and operated locations.

"It is exciting for me to be able to meet in person with the leaders of Fully Promoted Canada,” said Jonathan Strauss, president of Promotional Product Professionals of Canada (PPPC) and keynote speaker at the conference. "Business travel is returning, and our association is once again connecting in person with members and so I appreciate the invitation to be with the team at Fully Promoted. The industry is changing—big is getting bigger and small is getting specialized. Fully Promoted is in a great spot given the size of the group and local connectivity." 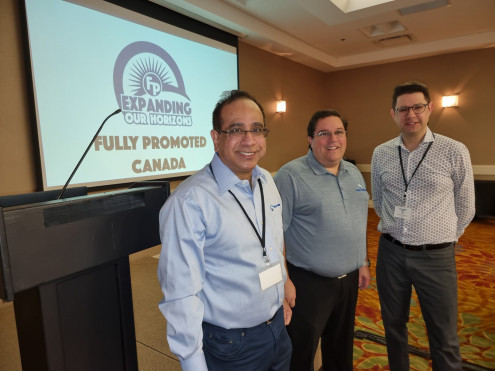 Fully Promoted leaders credited the franchise growth in part to the Canadian franchisees' extraordinary sense of collaboration and cooperation.

"Our Canadian colleagues believe strongly in working together so everyone achieves their goals, which is what the franchise model is all about," said Mike Brugger, brand president for Fully Promoted, who spoke on "Expanding Our Horizons," the Expo's theme. "We are here to help owners gain momentum where they are doing great and improve upon areas of opportunity. It was exciting to watch them brainstorm ideas for taking their success to even higher levels."

Attendees were treated to a wine-tasting dinner and had valuable opportunities to build relationships with executives and vendors during face-to-face meetings and a networking mixer. They held strategic planning sessions and heard inspirational speeches from industry leaders and Fully Promoted executives.

Top-achieving locations and individuals were honored with several awards:

Fully Promoted plans to make the Expo an annual event.