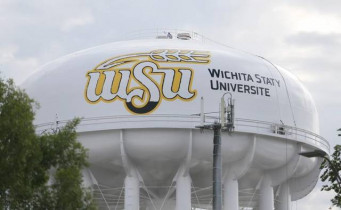 Officials fixed the gaffe one day after confused Wichita residents wondered how anyone could botch the spelling of the state university's name. (Image via kansas.com)

We know very well that we should make lemonade when life gives us lemons, but what might be a proper course of action when it presents typos? The overseers of the Humans of Wichita Facebook page had hoped to use a gaffe to be giving by peddling coffee mugs and T-shirts to benefit a Kansas theater, but barely two days into their altruistic endeavor, they announced via social media that they would be scrapping their plan.

They had drawn the inspiration for the gesture from the Thursday misspelling of Wichita State University as “Wichita Staty Universite” on a city water tower, a mistake that Mayor Jeff Longwell comically reacted to through this tweet, a take on the “No Regerts” tattoo immortalized in a Milky Way commercial.

We are "sory" and will get it "fixted" "A S I P." pic.twitter.com/aUZbopLmFG

School spokesman Joe Kleinhasser even chuckled when telling The Wichita Eagle that “Contrary to popular opinion, it wasn’t an innovative way of getting national publicity,” adding, “…we’re just having fun with it.”

The Humans of Wichita had wanted to inspire levity, too, and help a beloved arts destination in the process by selling T-shirts and other products highlighting the typo. Page administrator Dalton Sanders had earmarked the funds to go to the Wichita Orpheum Theatre, which, through the same publication, he tabbed “one of the last great historic theaters that we have” in the Sunflower State’s largest city.

However, yesterday at 10:14 p.m., Sanders or another affiliated figure posted the following message:

We will no longer be selling Staty Universite items. We are currently working with the TeeSpring website to get everyone's money refunded.

Sorry for the inconvenience.

I will update this thread once I hear more information back from TeeSpring.

Currently all posts regarding the fundraiser have been taken down and all items with Staty Universite have been removed from TeeSpring.

Teespring has found itself in a strange situation the last few days, but the Facebook-situated reactions make no mention of the company and the controversy. Rather, many believe that the Humans of Wichita received a rebuke for attempting to use the university’s trademark on the quickly crafted products. Some suspect that the group might have fared better and escaped any condemnation by simply using “Staty Universite” on the items.

What is your estimation? Should the Humans of Wichita feel “ashamed,” as one Facebook user said it should, for taking liberty even in the name of goodwill? Is the school displaying “poor sportsmanship,” as another replier states? Maybe there is a third way of thinking about the matter. Let us know!