Except for two cancellation periods that total roughly 14 years, Captain America has proven a superb source of print success for Marvel Comics since his March 1941 debut, even garnering the number two spot on IGN Entertainment Inc.’s list of the publisher’s top 25 superheroes. While many such upholders of justice, along with preservers of freedom under the DC Comics, Inc. banner, have “normal” names that have become commonplace associations when pondering their overall identity (think Clark Kent, Bruce Wayne and Peter Parker for Superman, Batman and Spiderman, respectively), Captain America serves as the alter ego for Steve Rogers, a designation that definitely does not come to mind or roll off the tongue as readily as the others. That sentiment received support recently when a game show contestant, despite wearing a Captain America T-shirt, botched a question about Rogers’ Avengers title.

I am much more of a baseball buff than I am a comics connoisseur, so I am going to admit that I knew the name of Steve Rogers as a Montreal Expos pitcher before I became aware of it as the appellation of the shield-wielding character. Therefore, I could easily overlook oversights by those whose loyalties do not rest with the world of comic books, but, in this case, I am prepared to be as critical of the contestant as Red Skull is of Captain America’s intentions to thwart his evil plans. The scrutinized individual appeared on “Ahora Caigo,” a Spanish quiz program that offered him a top prize of roughly $134,000 if he could answer a series of questions. 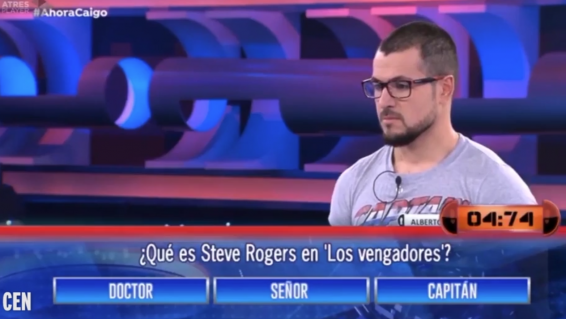 The contestant chose "doctor" as Steve Rogers' title within the Avengers. (Image via ladbible.com)

In a seemingly perfect example of being in the right place at the right time, the cash coveter named Alberto received from host Arturo Valls the question “What is Steve Rogers in the Avengers? Doctor, Sir, or Captain.” Now, we definitely do not need to know everything about something to enjoy it, but even with Steve Rogers being an American name and the contestant having Spanish lineage, one would think he would know that Rogers is Captain America’s non-heroic persona.

No amount of prodding from Valls, though, could keep Alberto from choosing “doctor.” The mistake led me to think about the sway that advertising and apparel can have over us. Simply put, many end-users love donning certain items because they help them to make fashion statements. Being located in Philadelphia, I often see people sporting baseball caps of teams that play outside of the City of Brotherly Love, and I am often guilty of thinking they know few, if any, players on said squads and put on the hats just because of their vibrant colors or organizations’ impressive histories. That, of course, is their prerogative, and I am not one to judge them, but I guess I am struggling to let Alberto’s gaffe go, especially since more than 100 worldwide partners created product tie-ins last year for the “Captain America: Civil War” film release from Walt Disney Studios Motions Pictures. However, to err is human, and I hope Alberto, whose quest for the ultimate cash prize would have continued had he just looked at his chest, does not let the missed opportunity get under his skin.