"Game of Thrones" is back, which has plenty of fans gluing themselves to the couch on Sunday night to transport themselves back to the exciting and violent land of Westeros. To celebrate, ThinkGeek is selling officially licensed "Game of Thrones" backpacks, which really go over the top in terms of detail and love of the show.

(Editor's note: Just to get this out of the way, I did not watch last night's episode, so if you wanted to comment spoilers for whatever reason, please don't. But now you might since I told you not to! I'll just avoid all of your comments to be safe.)

One bag, the "Dracarys" is modeled after the dragons belonging to Daenerys Targeryen. The bag's flap is made to look like a dragon wing (but ThinkGeek made it very clear that no dragons were harmed to make this bag), a brass "talon" decoration and a pattern modeled after the city of Meereen. 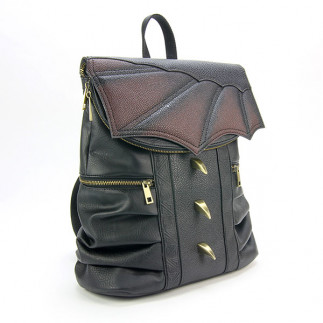 If you're not much of a "Game of Thrones" fan, that's OK. We won't go too deep with the show-centric details.

To see the Jon Snow- and House Targaryen-themed bags, click on over to ThinkGeek.

And, again, to reiterate, please do not spoil the first episode for me. I fell asleep early last night.

How a Distributor's One-on-One Supplier Meeting Led to $7,000 in Orders: a Back to Business Virtual Power Meeting Success Story