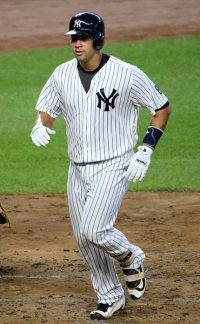 Gary Sanchez has smacked 33 home runs for the New York Yankees in only 417 at-bats. (Image via Wikimedia Commons)

Gary Sanchez has amassed 119 hits for the New York Yankees, and 33 of them have left the yard, so strictly from a performance point of view, the 24-year-old deserved his spot in last night’s T-Mobile Home Run Derby. From an artistic perspective, the young Bronx Bomber, no matter how many more dingers he will go on to deposit in the record books, will forever win regard for having used customized Kraken bats during the competition.

The reference is to a legendary sea monster whose colossal size and destructive demeanor have made it a popular figure through such films as “Clash of the Titans” and “Pirates of the Caribbean: Dead Man’s Chest”; literary works like “Moby Dick” and “Twenty Thousand Leagues Under the Sea”; and television series that include “The Big Bang Theory” and “Game of Thrones.” The fear with which people have come to associate the aquatic antagonist has even led to the exclamation “Release the Kraken!”

Tenacity, rather than tentacles, has helped Sanchez to enjoy his first full season in the bigs, and though he reached the All-Star break with “only” 13 home runs in 57 games, he still caused a stir during last night’s contest, knocking out hometown hero and defending champion Giancarlo Stanton in the first round. He would lose in the semifinals to eventual runner-up Miguel Sano, of the Minnesota Twins, but there were no cracks in his Krakens on his way to 27 total long balls.

Customized bats have long held sway among lovers of America’s pastime, with Louisville Slugger among the entities helping hitters to go yard. We here at Promo Marketing would definitely welcome the chance to step to the plate with Sanchez’s lumber or these specimens that “The Walking Dead” gave to players in the winter. The second-place Yankees, whose Aaron Judge won the derby, begin the second half of the season Friday, visiting the division-leading Boston Red Sox for a four-game series. Sanchez will not be able to aim for the Green Monster with the Kraken bats, but maybe his usual wood will prove customarily reliable.