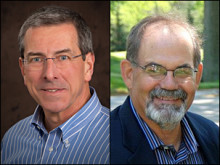 Gene Geiger (left) and Chuck Pecher will be inducted into the PPAI Hall of Fame.

The promotional products industry has grown and prospered because of this creative spark and the dedication of many, but there are some individuals whose selfless efforts and devotion to the industry are monumental. PPAI gives permanent recognition to these individuals through induction into the PPAI Hall of Fame.

“Gene and Chuck’s years of leadership and volunteer service have guided and benefited PPAI in innumerable ways, said Paul Bellantone, CAE, PPAI president and CEO. “Their vision for this great industry still guides us today.”

As CEO of the Geiger Group since 1994, Geiger is the fourth generation to lead the family business. During his tenure, the company has risen to become the nation's largest privately held distributorship, even as it has held true to the core values that have served as its foundation for 130-plus years.

Geiger has been recognized by PPAI with its Distinguished Service Award, PPAI Volunteer of the Month and as a PPAI Fellow. He has served twice on the PPAI Board of Directors, including the roles of vice chair of financial services and vice chair of technology. He has been an ardent champion of the industry’s product safety initiatives, and served as both member and chair of the Product Responsibility Advisory Group. Geiger also has been heavily involved in the industry’s e-commerce standards.

Currently, he is co-chair of the annual PPAI Product Responsibility Summit. He has served on innumerable PPAI committees over his many years of volunteering, and encourages his staff to volunteer at the regional and national level.

Pecher began his industry career in 1975 at Skinner & Kennedy Co. Now, 42 years later, he is credited with the strategic organization of PPAI when it moved to Irving, Texas. He helped streamline the board, reorganize the committee structure and redefine the role of board chair, and develop the first major process for strategic planning.

In 1993, Pecher was instrumental in rebranding the association from Specialty Advertising Association International to Promotional Products Association International. In addition, as chair of Promotional Products Education Foundation, he developed and implemented the first major fundraising program. In 2000, Pecher was recognized with the Distinguished Service Award and in 2016 as a PPAI Fellow.