When something hits the news cycle for more than 30 seconds, the natural instinct for a lot of people is to turn it into merchandise and make a quick buck. We do this with sports, television, you name it. If it got a few hundred retweets or shares on Facebook, there are probably people who want it immortalized on merchandise.

But where do we draw the ethical line of commemoration of a temporary monoculture and inappropriate capitalization on a tragedy? You could argue that turning the civil unrest related to the murder of George Floyd into merchandise would cross that line, or at least blur it.

As protests mount across the country, wearing and distributing T-shirts with Floyd and others’ names or faces on them is a common practice. It humanizes the issue, allowing people to mourn the loss of a man and commemorate a life lost.

But what about a “Call for Justice for George Floyd” throw pillow or “George Floyd RIP” underwear ($18 for a pack of three). Yes, those are real items, as found by USA Today.

“Clearly opportunists,” James Thomson, an adviser for brands selling merchandise online, told USA Today. “All these people selling T-shirts, they’re basically along for the ride, making money on it. Whether they care about the social aspects, it’s just the surfboard to jump onto and ride as long as the wave is there.”

The George Floyd protests were hardly the first instance of this. It’s a common practice after celebrities and public figures pass away to sell merchandise celebrating their life and work. But does Floyd’s circumstances and his status as a private citizen change the parameters of what is and isn’t acceptable and appropriate?

One could argue that the ethical status depends on where the money goes. On a very surface level, even if the seller pockets all of the proceeds themselves, it does good by spreading awareness and the message of George Floyd’s tragic death and the support for the Black Lives Matter movement. It gives supporters another tool, like a sign, to get the message out at protests or on the street.

On the other hand, there are countless organizations devoted to fighting injustice, to preventing what happened to Floyd and countless others from happening to others in the future. And with those organizations so tightly-knit within the protest movements all throughout the country, one could also argue that it behooves those merchandise sellers to at least kick a portion of the proceeds their way. 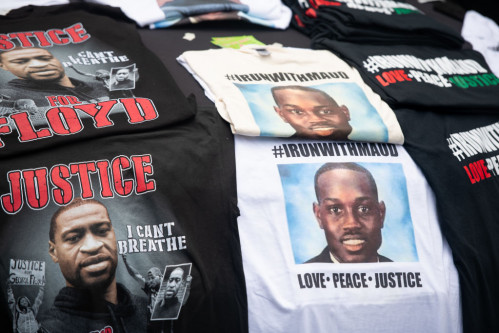 BRUNSWICK, GA - JUNE 04: T-shirts memorializing George Floyd and Ahmaud Arbery are displayed for sale on a car hood outside the Glynn County courthouse during a court appearance by Gregory and Travis McMichael, two suspects in the fatal shooting of Ahmaud Arbery, on June 4, 2020 in Brunswick, Georgia. Arbery was killed on February 23. | Credit: Getty Images by Sean Rayford

The financial opportunism has been a problem for celebrities, too. After the passing of Kobe Bryant and his daughter Gianna earlier this year, eBay took down all listings for the items people got at their Staples Center memorial service.

“Please note, due to the sudden and tragic passing of Kobe Bryant, eBay has made the decision to prohibit the sale of merchandise, images and mugs related to their passing,” the company wrote at the time. “We do not allow listings that attempt to profit from human tragedy or suffering.”

Right now, there are plenty of George Floyd T-shirts on eBay. Many include the phrase “I can’t breathe,” which has become a battle cry for people speaking out against police brutality. There are even embroidered face masks with that message.

There was a moment after Prince’s death where his estate toyed with the idea of limiting merchandise relating to deceased artists, but Prince merchandise popped up all over the place (mostly in Minnesota) for years. And even his memorial service came with gift bags.

But the circumstances of these situations are very different. When are posthumous commemorations OK? When does genuine desire to immortalize someone and use their death to create positive change become cynical and self-serving?

One seller outside of the George Floyd funeral in Houston (who came all the way from South Carolina) told USA Today that merchandise “helps somebody make a silent statement for what they stand for.”

Another seller echoed this statement, saying that it’s just a way to spread the word for a good cause, even if the money goes to the seller and not the cause.

“Yes, I’m selling a product, and people are wearing this product to express their desire about this particular issue, right?” he said. “The product is used to promote the issue.”

Others are selling memorabilia with Floyd’s likeness and publicly donating the money to different organizations.

Ellie Bryan, a Minneapolis-based artist, told USA Today that her artistic representation of Floyd was used to raise more than $2,000 for the George Floyd Memorial Fund and the Gianna Floyd Fund.

“I am not interested in cashing in on his death,” Bryan told USA Today.

But others are. Thanks to the ability to “right-click-save” an image from the internet, people are selling merchandise using Bryan's art without her approval.

“In fact, I have already had to take legal action against people who have stolen my artwork for the intention of doing that,” Bryan added.

The ethical argument could go longer than we have space for. But even from a legal perspective, it’s still a little murky.

“I think the First Amendment should be protecting those sorts of collective moments of grieving or a political movement,” Jennifer Rothman, a law professor at Loyola Marymount University’s law school and of “The Right of Publicity: Privacy Reimagined for A Public World,” told USA Today. “But the law is incredibly unclear about how to treat uses in merchandise.”

Rothman cited how Dr. Martin Luther King Jr.’s estate blocked the ale of plastic statues with his face, but Rosa Parks’s foundation couldn’t do something similar.

The problem could lie more with the impersonal merchandise machine of the internet, rather than the people on the ground at protest sites.

"A made-to-order seller doesn't really care whether somebody picks a pair of underwear or a lunch box or a T-shirt,” Thomson added to USA Today. ”You don’t care, because in the end, it’s all the same. I take a $2 T-shirt, put a logo on top of it and sell it for 20 bucks. Let’s rinse and repeat and make a lot of money.”

The consensus among people who are selling merchandise in person, rather than working behind the curtain of e-commerce, appears to be that money aside, the goal is to boost the memory of George Floyd and the cause his death helped spark.

“It’s not really about the money,” Darick Breland, a merchandise seller in Venice Beach, told USA Today. “It’s about me being an African American male and understanding the messages needed to be heard.”