Give Winter the Cold Shoulder With Outerwear and Jackets 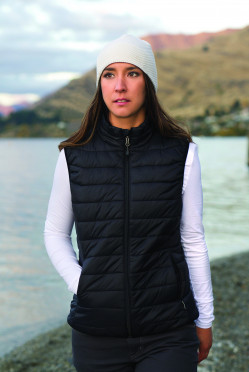 We can tackle only one day at a time, but our high-powered brains love to play prognosticators and have us contemplate what is to come. Fall has barely begun to beckon us to enjoy its compelling qualities, but plenty of people, perhaps channeling their obsession with “Game of Thrones,” are declaring, “Winter is coming.” Remaining grounded in one time-frame can prove difficult, especially when we are concerned with looking skyward to see which elements we might have to brave.

BUNDLES OF JOY
While we expect certain apparel items to leave something to the imagination, outerwear and jackets make quite evident that end-users possess panache. Their desire for distinction, coupled with industry figures’ awareness of technological advances and possibilities, makes this a particularly interesting time to study how best to conceive and implement selling strategies. With the advance of autumn, there is no time to burn daylight if those approaches are going to eclipse competitors’ courses of action, and standing out comes down to daring to be daring.

“We believe in taking chances, which means we continue to innovate and try new product,” Chen said of his company, which has enjoyed esteem as a performance outerwear category supplier for 20 years. “Whether it’s upgrading a bestseller or taking a chance on a whole new category of apparel, I would say we are relatively fearless when it comes to product.” The California-based overseer believes that no matter one’s niche within the outerwear and jackets division, a similar mindset will prove fruitful, as it shows allegiance to diverse tastes and informative trends. For Landway International, that diligence has distinguished it as what Chen considers “a four-season outerwear company,” an impressive feat given the temptation and downright frequent need for suppliers and distributors to give certain products only seasonal attention.

RESEARCH RESULTS
The trio of responders has observed that jacket demands have tended to lead talks on how to sate consumers, with Chen offering that such requests have become “more and more polarized,” resulting in calls for either low-budget or high-end commodities. Landway International is embracing that mix, knowing full well it is helping end-users reveal their individuality. That is a mindset his Golden State contemporaries at Tri-Mountain revere, too.

“We continue to provide top-selling outerwear through our ongoing investment in researching and innovating the next generation of outerwear,” Perez said as a believer in the “you have to spend money to make money” philosophy. “This means including trending features so we are in line with the styles of the day, and also incorporating technical features into our apparel through unique fabrics and treatments.”

He and his peers see outerwear and jackets as keys to accentuating uniqueness and a flare for flashiness, noting several types can, for example, accompany polos or woven shirts. Such helpers include performance-wear jackets, performance fleeces, quarter-zips, three-season jackets, three-in-one jackets, cotton canvas, soft shell-bonded, business casual jackets and many more.

“This versatility is great for customers,” Perez said. “They can find a type of jacket that suits their needs and brand it, in addition to their branded polo or woven.”

With regards to marketing the assortment of possibilities, Klein bluntly stated, “Things have changed,” noting that technology has forever supplanted catalogs and that direct sales to consumers occur far more often now that independent retailers have dwindled. Despite alterations to methods, Pella’s personnel have always looked at selling on quality and not on price. As the company dates back to the early 20th century, Klein considers that commitment a timeless reflection on how others can benefit, too.

“Quality pays for itself all the time,” the Midwest businessman said. “For us, there is a tremendous emphasis on higher-than-average-quality items being produced because there are obvious repercussions if we don’t nourish that thinking in this field. For example, distributors are definitely not wanting for people to be beset by low-quality products.”

“It’s simple,” Chen said of what sets outerwear and jackets apart from other apparel items. “They are worn outdoors, and you want that logo front and center outside when people are engaging and socializing with one another. Also, people tend to notice jackets more than inner-layer garments. You often hear people say, ‘Hey, nice jacket, where did you get it?’ But not as much [do you hear], ‘Hey, nice Henley shirt.’ I think, in general, jackets (garments that you wear as the outermost layer) tend to be more representative of a person’s identity and interest. So, folks think about it more in their selection
of jackets.”

He added that all salespeople enjoy selling jackets because they are higher-ticket items, and that end-users consider the products “both utilitarian and fashion,” as evidenced by their having multiple choices for different purposes. Because of the ubiquity of jackets and their revered status, it could be tempting to consider the selling process a cinch, but the qualities that make them so appealing could also prove problematic.

“My main tip for distributors is to have samples on hand or sent directly to the customer,” said Perez, who observed that in doing so, industry figures will likely be showing off lighter, less bulky products that possess the same protective qualities as heavier ones. “Apparel needs to be seen in person, felt and worn. That really makes a difference.”

“Source jackets that consumers actually want to wear,” Chen advised. “Otherwise, if the recipient just keeps it in the closet, then it loses its purpose. Don’t just show clients products from an obvious supplier, the same supplier that probably all of your competitors in town are showing. Always offer good, better and best options, regardless of budget.”