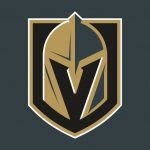 The logo for the Golden Knights will certainly have prominent placement on their yet-to-be-unveiled jerseys. (Image via Twitter)

Hockey buffs can fully revel on Monday when the Nashville Predators and the Pittsburgh Penguins commence the Stanley Cup Finals at the latter’s PPG Paints Arena. While their series should be a captivating conclusion to the National Hockey League’s 100th anniversary season, many fans are already fixated on the fall when the Vegas Golden Knights will debut as the 31st active franchise to seek sips from the Cup. The expansion team will likely need a few years to cash in on its potential, but supporters are already gearing up to secure merchandise. Unless they are season ticketholders, though, they might have to wait until August to purchase jerseys.

“That’s what I’ve been told,” team president Kerry Bubolz said of the delay. “We’re waiting on the NHL to let us know.”

Eager backers have yet to glimpse mock-up versions of what the Western Conference club’s skaters will don, a result of the league’s recent naming of Adidas as its uniform provider. That decision has meant that the company must see the expansion squad as an equal when producing official league and team jerseys, therefore eliminating any considerations of giving the Golden Knights preferential treatment. With 12 established franchises to receive uniform alterations for the 2017-18 campaign, Adidas workers’ summer vacation plans could need some tinkering.

The news of the probable August release provides a test of one’s patience, for sure, but it also inspires curiosity. The construction of the Nevada newbie’s roster will occur through the expansion draft set for June 18-20, with the announcement of the results occurring June 21 during the NHL Awards ceremony at the Golden Knights’ Paradise-situated T-Mobile Arena, and the June 23-24 entry draft set for June 18-20 at Chicago’s United Center. The selections will need to wear some indicator of the teams where they will ply their trade, so one could safely bet good money that the unveiling of the jersey will occur quite soon. Other items appear in abundance on the Golden Knights’ NHL apparel section, so it’s also not a gamble to presume that demand will increase as fans think about which heroes’ names and numbers will go on the back of the shirts.