Goldman Sachs was set to have an event this week that would allow small business owners to meet with legislators and share their problem areas with the people making a difference. Sounds fine, right?

Except, there's one minor problem: The event was called “Storm the Hill,” and after last week’s attack on the Capitol Building, Goldman Sachs had to do a little damage control, including telling recipients to please not wear the event T-shirts they had already received.

The financial giant sent out an email to recipients distancing itself from the acts of last week, asserting that this was just exceptionally bad luck and asking attendees to wear other branded apparel related to Goldman Sachs' 10,000 Small Businesses entrepreneur training program.

“We chose the slogan to represent our enthusiasm to take part in a democratic process to advocate for small businesses,” Goldman Sachs said in a statement to participants, according to the Wall Street Journal. “If you have other 10,000 Small Businesses apparel, we would encourage you to wear it.”

The bank also changed the name of the event to the much safer “Virtual Capitol Hill Day.”

During the first week of January, Goldman Sachs planted yard signs in front of the Capitol Building urging legislators to help out small businesses struggling due to the pandemic. 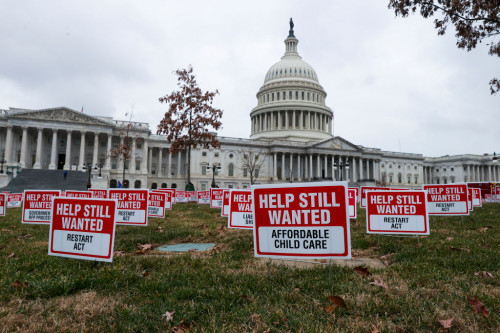 No one is going to accuse Goldman Sachs of stoking violence or telling attendees of a small business event to commit anything close to what happened in D.C. last week. Obviously, Goldman Sachs had this event’s branding squared away long before last week. This is just … cosmically bad luck and bad timing for Goldman Sachs.

In just about any other week in the last century, this would’ve been a good name for an event like this. No one would have batted an eye. And the idea of sending T-shirts for a virtual event to create unity for the attendees “meeting” with legislators is standard means of operating during the pandemic, when most events have been forced to go fully virtual or at least hybrid.

But, credit to Goldman for not just going with it anyway, and being aware of the optics it creates. By asking its attendees to wear something different, effectively scrapping the T-shirts they bought for the event and sinking that cost, they’re still doing a service to their own brand by steering clear of anything that could remotely link them to the Capitol riots.

This is a good cautionary tale, illustrating that sometimes Murphy’s Law manifests itself, and it’s important to have a cool head and a good plan B.