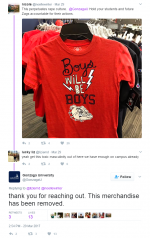 While the loss by the men’s basketball team in last night’s national championship game will dominate discussions at Gonzaga University, the Spokane, Washington institution has entered its second week as a space for debates on apparel items’ overt and interpreted intentions. Following a student’s March 29 Twitter condemnation of a T-shirt bearing a “Boys will be boys” declaration, the location removed the in-question garment from the school’s Zag Shop.

The offended registrant, who has since protected her account on the social media site, requiring users to send “Follow” requests to view her views on contemporary life, dubbed the children’s item a tool in perpetuating rape culture, directing the administration to “Hold your students and future Zags accountable for their actions.” Given the male hoopsters’ presence in the Final Four, the private higher learning facility wanted “to be focused on that and not distracted by a little T-shirt,” spokeswoman Mary Joan Hahn said of the matter, which swiftly ended, at least in the physical sense, the same day that the Twitter backlash appeared.

“We are aware that seemingly simple statements can sometimes be interpreted to insinuate unintended meanings, and when sensitivities are expressed, we take concerns seriously,” Hahn added. “We want GU apparel to reflect our respect for everyone.”

With American society becoming increasingly divided over determining what proves offensive and harmful and what is attempting to convey insight into human nature, the Gonzaga personnel’s decision to pull the shirt, which features mascot Spike the Bulldog, has met with predictably equal parts adulation and disdain. Supporters of the move have stressed the need to continue to work against what they feel is a patriarchal stranglehold on morals, and opponents have acknowledged that although derogatory messages do appear in apparel and other merchandise, the Bulldogs T-shirt does not deserve placement in the other camp’s doghouse.

Following the Wednesday unpleasantness, the basketball squad, which has been a prominent program since coach Mark Few’s arrival in 1999, knocked off South Carolina in the national semifinals but fell to North Carolina, 71-65, in the Phoenix-held title tilt. The loss inspired a Spokesman Review article on dashed plans to market the Bulldogs as the best team in the land. As the Bulldogs reflect on their record-breaking campaign, which yielded 37 wins, the second-most triumphs in NCAA single-season history, and as the preparation for next season commences, one can be sure that last week’s marketing miscue will factor into how school officials show pride in their students’ athletic feats and how they contemplate their contributions to national discussions on apparent and perceived slights with regards to any form of mass communication.