The internet has given us countless opportunities for education and growth as human beings. We can access information at the touch of a button. Arguments are settled in seconds. We can see metaphorical vaults of historical documentation from a little device in our pocket. It also comes with some double-edged swords, however. The permanence of history can be great from an educational standpoint, but it can come back to bite you when previously held opinions or old statements no longer go away, especially if they haven't aged particularly well.

President Donald Trump's preferred social media platform, Twitter, is home to a few of his most impulsive thoughts or possibly outdated beliefs. One company has decided to expose a bit of the hypocrisy and cognitive dissonance manifesting itself on the president's Twitter by creating President Flip Flops.

They are just ordinary looking sandals, but each one has a different tweet on it. When together, they show contrasting opinions on things such as the electoral college, military intervention in Syria and the validity anonymous sources. The item's tagline is "Walk a mile in his shoes and you'll end up doing a split."

Going back on your word, one step at a time.

Unfortunately for those looking to show their distaste with the president's Twitter usage, the first run of 1,000 flip flops are already sold out. The designer, Sam Morrison, purchased 1,000 blank flip flops and hand-printed them himself, selling them for $27.99 a pop.

He also donated 10 percent of each purchase to the American Civil Liberties Union, according to Business Insider. 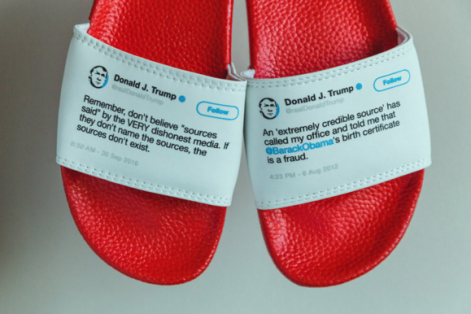 "The minimum order of raw materials was 1,000 pairs and took two months to ship to me," Morrison told Business Insider. "I hand-printed all 1,000 pairs with a heat press, packaged and shipped everything myself, so it was a very time-intensive project."

Due to the time-consuming nature of his one-man operation, Morrison said that, at least for now, the shoes are "permanently sold out."

Remember Post Malone's Crocs? Those aren't anything particularly special, or even conventionally attractive, but when they have a big name attached to them, they're a hit. The other trend covers some recent Trump merchandise that skews away from the normal political merchandise like signs or T-shirts. Remember the Trump football jersey? While that was pro-Trump and this is decidedly anti-Trump, they still show the desire to show political leanings through items other than bumper stickers and basic T-shirts.