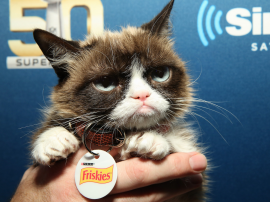 The feline internet celebrity known as Grumpy Cat may have a reason to smile following the recent result of an intellectual property dispute that stretches back to 2015.

The case itself had to do with a beverage company that had made a deal with Grumpy Cat Limited, the company founded by the cat’s owner Tabatha Bundesen in order to oversee the sale of promotional products such as T-shirts, books and pillows. Grenade, the beverage company, was given a contract to produce and sell a line of coffees under the “Grumpy Cat Grumppuccino” moniker.

However, Grenade decided to sell products outside of the agreement, including unspecified promotional merchandise and a “Grumpy Cat Roasted Coffee.” When Grumpy Cat Limited caught wind of this, it filed a federal lawsuit against Grenade for copyright infringement.

In the spirit of its feline namesake, Grumpy Cat Limited took a lighthearted approach in wording its complaint, which stated the following: “Ironically, while the world-famous feline Grumpy Cat and her valuable brand are most often invoked in a tongue-and-cheek fashion, Defendants’ despicable misconduct here has actually given Grumpy Cat and her owners something to be grumpy about.”

Despite a countersuit filed by Grenade—it claimed that Grumpy Cat failed to suitably promote its coffee—Grumpy Cat Limited came out victorious, and was awarded $710,001 in damages. That’s a whole lot of catnip.

Since 2012, Grumpy Cat has been a promotional powerhouse, reportedly generating millions for her owner through the sale of branded merchandise. Grumpy Cat has also served as a spokescat for brands such as Honey Nut Cheerios and Nestle’s Friskies brand of cat food.

It’s no surprise then that Grumpy Cat Limited sought to protect its intellectual property. Grumpy Cat isn’t only a cute little cat—she’s the face of a formidable and lucrative line of promotional products.