When will Forever 21 just get the hint? Seriously, we're getting sick of having to report every time the retailer is on the receiving end of a lawsuit. This time, fashion heavy-hitter Gucci is suing Forever 21 for trademark infringement, after the latter started selling items with similar stripe patterns. This comes after Forever 21 tried to be proactive by protecting its trademark for the stripes.

"Gucci is really having a moment and driving a lot of sales with these stripes," Susan Scafidi, director of the Fashion Law Institute at Fordham University, told CBS News.

This relates back to the issue we brought up when Forever 21 first tried to trademark the stripe pattern: Can you really trademark stripes? Scafidi said yes.

"When customers recognize a certain striped pattern, whether it's Gucci's green-red-green, or Adidas' three-striped mark, then we give those companies recognition that those marks belong to those companies," she told CBS News.

Scafidi added that, while imitation might seem like a form of flattery to some, Gucci's image and value "becomes diluted," which impacts its profitability by offering a cheaper substitution.

Unlike Forever 21's attempt at protecting itself, Gucci has built a pretty air-tight case against the retailer.

Scafidi pointed out a side-by-side image to CBS News, showing one of Gucci's products compared to a Forever 21 jacket. 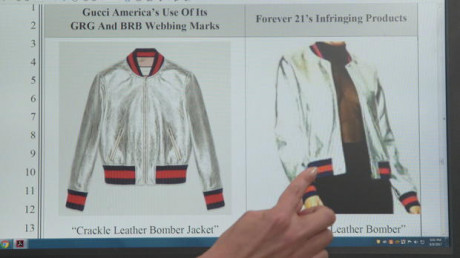 Gucci's product on the left is eerily similar to Forever 21's on the right. | Credit: CBS News

"This is Gucci's counterclaim in two pictures," she said. "Forever 21 is focused on the stripes, and claimed that they used blue-red-blue stripes randomly. Gucci would like the court to look at this and say, 'Oh, no. That wasn't random. You're copying the entire Gucci product and attempting to convince the consumer to think about Gucci when it's really just Forever 21."

Gucci wants this lawsuit to "finally put an end" to Forever 21's "blatant exploitation" of its (and others') trademarks. At this rate, we're not sure that anything could stop Forever 21. It almost seems compulsive at this point.