People Can Hack Hoverboards Now (Because They Weren't Unsafe Enough Before) 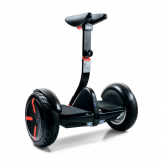 Researchers found that you can hack the Segway MiniPro via Bluetooth. | Credit: Wal-Mart

Hoverboards have been all over the news due to the potential risks of their lithium ion batteries. In response, some companies have been making what they believe will be safer versions of the popular transportation devices. But, while combustion might not be at the top of the risk list anymore, there are still problems on the horizon.

You might be surprised to hear that hacking is one of them.

With the growing popularity of smartphone integration in just about everything these days (seriously, like toothbrushes and fidget spinners), the threat of hacking is ever-present. When Segway introduced its new hoverboard product called the MiniPro, which lets users connect and control it through their phones, researchers figured out how to hack the connection and "hijack" the MiniPro, according to CNET. This let the research team control the hoverboard from as far as 200 feet away.

"The attacker is able to cause the hoverboard to just turn off while there's somebody on it, which could trigger a face plant," Thomas Kilbride, one of the researchers at IOActive, told CNET.

While the possibility of watching a stranger take a nose-dive off their hoverboard sounds funny on a cartoonish level, it presents a risk for serious injury, especially if the user is near traffic or other people.

Additionally, since it's over Bluetooth connection, the owner of the hoverboard can't turn off the item's Bluetooth connectivity. So they'd pretty much be at the mercy of the hacker, who can cause it to speed up, slow down or stop abruptly.

Segway hasn't made any comments about this discovery, but the security firm told the company about it back in December, prompting it to fix the issue in April. Going forward, however, we'll have to see if other hackers manage to find their way around the newest forms of protection.