With an associate’s degree in graphic design, Howard Potter had a job pouring metal in a casting shop and a hobby of designing promotional materials. But Potter saw an opening for a promotional product and decoration company in his area that did its own design work, so, in 2003, he left his day job and pursued his side job to create A&P Master Images in Utica, N.Y., which focused on decoration from the start by doing sublimation in-house and subcontracting out any other decoration needs.

By 2006, the need for better quality and faster turnaround on embroidery resulted in the business bringing it in-house with the guidance of Joyce Jagger, aka “The Embroidery Coach,” who helped with the launch and has trained staff for the last 15 years. With the company’s decoration capabilities growing, so did the space. A&P Master Images increased its floor plan to 700 square feet in 2007 and more than doubled it in 2008 in order to move screen printing internally. 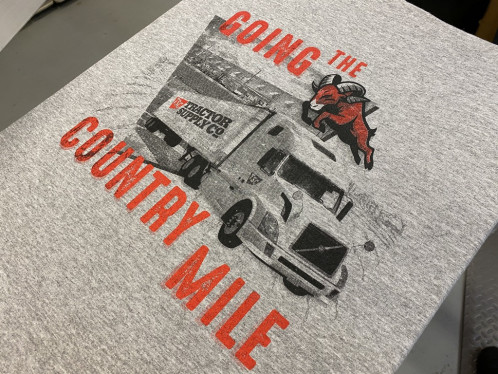 “It allows us to control the quality, turnaround time and handle all size orders to keep our customers getting what they need, when they need it,” said Potter, who co-owns the business with his wife, Amanda.

Read on for the second installment of Decoration Diaries as we learn directly from Howard Potter how A&P Master Images pitched the idea to use a trendy screen print technique to bring a customer’s hand sketch to life. The promotion that the client planned to give to employees who hit set goals was such a hit it evolved into an online company store for fulfillment and future business with the client on other projects.

The client’s need: Tractor Supply Company distribution center was looking to get T-shirts screen printed, but only had a hand sketch that an employee came up with, so we created our own spinoff on it and did a screen printed halftone design that everyone loved.

The execution: With creating the design from the sketch, it gave us a head start in the right direction and it was just a matter of getting the vision to come to life, which we were able to do. 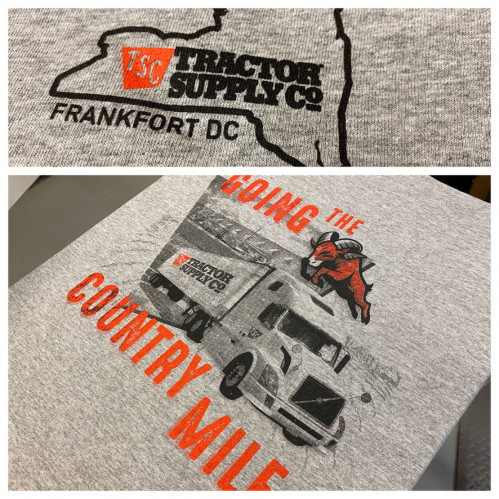 Halftone screen printing is used for print photographs, which you are using dots to create the image by ripping it in Photoshop to print like an old film negative. [It] allows you to print high-end detail with using a high mesh screen. Printing halftones also helps with print doing the simulated printing process, which allows you to blend colors. The halftone that we designed allowed us to create a design that gave the image depth and allowed for more detail to be seen in the design.

The obstacles: [The] only hurdle, which is common with printing halftone designs, is test printing to see how many hits per color are needed to get the detail to print as clean and clearly as possible, which we were doing during our test print phase.

The outcome: They loved it. It got the message across that they were looking for and led to more orders.