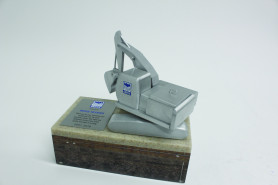 Employee recognition programs are great ways to show that their work is valued, and can be a strong incentive for them to keep up the good work. Melanie Levans, MAS, national account executive for HALO Branded Solutions, Sterling, Ill., remembers one recent promotional campaign that allowed her to flex her creative muscles.

Promo Marketing: Could you tell us about a promotion that you thought was one of your best?
Melanie Levans: I thought of one that rose to the top that I just did in February of this year. The timing on this project was perfect, because I was at PPAI when the request came to me from my client at Castle Contracting. She was looking for a unique award to recognize an outgoing CFO who had dedicated over 25 years to their company. She wanted me to locate a crystal award in the shape of an excavator. I was not able to locate anything in crystal. Besides, crystal didn’t seem like an appropriate material for an excavator. I wanted to find something in metal or like metal. As I walked the tradeshow floor, I came across Design Franc Art, a company out of Canada that does very unique artistic awards. I saw an example that I liked and spoke with Jérémie Weber-Fillion, who was able to brainstorm with me. I wanted the award to replicate an excavator that would sit on a base that looked like earth and rock.

PM: What did you like about this promotion in particular?
ML: I was excited about the potential of creating something completely different, so I sent an example photo to my client that was of an oil rig drilling into an “earth” base. She was skeptical at first, but I convinced her to allow us to show her some concepts, which she loved! Production took about four weeks at a cost over $1,000. We sent her photos of it being produced and a final photo, which she framed to present to Mike Meyers, who was moving from their office in Missouri to work in a different division in California. The award was shipped to his new office in California, so it would be waiting there for him in his new office. She also asked for a few other gifts to present to him that included a Cutter & Buck V-neck Vest, an Urban Peak Gift Set from Starline, and a retro name badge for him to wear at his new company, all of which I was able to provide to her complimentary.

PM: What challenges did you run into?
ML: The customer was first insistant on a crystal award. As I mentioned, I didn’t feel it was the right material for land-moving equipment like an excavator. So I just needed to convince them of the idea to create an award that replicated the equipment and earth. It actually moved, by the way—side to side and up and down.

PM: Do you have any advice for distributors looking to do something similar?
ML: Look for supplier partners that have highly skilled graphic and product designers who can creatively think outside of the box. The brainstorming that occurred with a knowledgeable factory rep and the design team is how we were able to produce something so unique. I have a graphic background and am also an artist, so I typically can provide art direction to suppliers to get what I’m looking for.