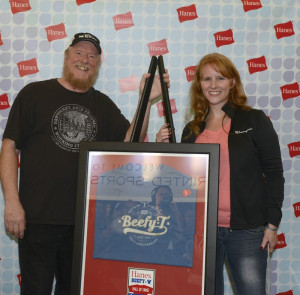 Hanes Branded Printwear, Winston-Salem, N.C., announced that it has inducted Rick Roth from Pawtucket, Rhode Island-based Mirror Image, into the “Hanes Beefy-T T-shirt Hall of Fame.” Hanes recognized Roth with its Hall of Fame award during a celebration event at the Imprinted Sportswear Show (ISS) in Long Beach, Calif. The Hanes Beefy-T T-shirt Hall of Fame, located at the Hanesbrands Inc. corporate headquarters in Winston-Salem, N.C, recognizes individuals and companies that have built their businesses around the Beefy-T T-shirt, using creativity, business savvy and dedication.

“Rick has been an integral part of the decorated apparel industry for decades,” said Rachel Newman, director of sales and marketing for Hanes Branded Printwear. “With his artistry, curiosity and his drive for perfection, he opened new avenues for apparel decoration and helped elevate it to a craft. For Rick, the Hanes Beefy-T T-shirt has always been more than just a T-shirt: It is a canvas for his designs.”

“I’ve always been driven to make the coolest shirts and the most advanced prints, whether perfect reproductions of photographs and paintings, or the most convincing special effects,” said Roth. “The Beefy-T is consistent, 100 percent ring-spun cotton, heavyweight and built to last. When you print something on a Beefy-T, it might last 50 years. So it better look good!”

In addition to his success in the decorated apparel industry, Roth is a force of good as a major supporter of several charitable organizations. In celebration of his induction, Hanes donated a check in Roth’s name to New Orleans Musicians’ Clinic, an organization he has supported for many years.

“I've tried to make the world a better place, whether the world in general or the world of screen printing, for that matter,” said Roth. “I think that resonates with people, and most people want to do good things.”

“From his ingenuity to his creative spirit, and his commitment to his community and society as a whole, it’s an honor to induct Rick into the Hanes Beefy-T Hall of Fame,” Newman said.

Past inductees into the Hanes Beefy-T T-shirt Hall of Fame include Eskimo Joe’s, The Salty Dog Café, RK Stratman, The Graphic Cow and Matsumoto Shave Ice.