The suit, filed last Thursday, alleges that the apparel company is infringing on Hanesbrands' Champion brand trademark with its logos that serve as a "parasitic business model." The defendants are Maxima Apparel Corp. and three affiliates. Maxima is best known for its Hudson Outerwear brand.

The image in question is Champion's "C" logo, and Hanesbrands is claiming that Maxima is using an image "either identical or confusingly similar" to Champion's "C" in brands, like Gangster and Chapo. 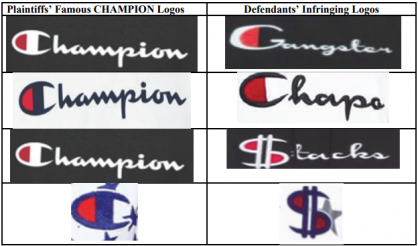 A side-by-side comparison of Champion's logo versus the defendants' infringing logos. | Credit: Law360

This battle apparently goes back to June when Hanesbrands asked Maxima to stop using the C. At the time, the defendants agreed to cease using the logo, but it looks like the company continued to illegally use it. Not only that, but the defendant also "expanded the scope of their sales and the number of infringing products," and sold its products where Champion's products were also sold.

Hanesbrands is requesting that the court permanently bans Maxima from using the infringing logos and any other similar designs. The company is also seeking compensatory and other damages from the infringing products already sold.

This isn't Hanesbrands' first court battle. Back in 2014, the company sued Gildan Activewear, Montreal, Canada, for infringement on its trademarked X-TEMP moisture-wicking name and logo. Eventually, Hanesbrands withdrew that lawsuit, but this time, it seems like the company is not willing to back down.

We will keep you updated on any court decisions.