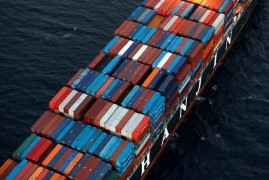 After filing for bankruptcy, the fates of multiple Hanjin cargo ships are uncertain. (Image via Reuters)

Cho Yang-ho, chairman of Hanjin Shipping, the South Korean shipping company, said that the company's demise was a result of playing "a game of chicken" with large, government-backed shipping companies. The company sought receivership after its state bank supporters pulled out, literally stranding $14 billion in cargo and bankrupting the company.

"As a private company, we felt the limit of participating in a dumping war and asked for support, but I failed to convince," Cho said at a parliamentary hearing today, according to Fortune.

The company, which once was the world's seventh-largest container shipping firm, plans to submit a rehabilitation plan in December, but Fortune reported that industry insiders believe the company will be liquidated in what would be the largest-ever bankruptcy in the industry.

In 2014, Korean Air Lines acquired a controlling stake in the company, adding about $1.8 billion in capital and cutting its debt-to-equity ratio to 800 percent from approximately 1,400 percent. But, according to Cho, rival, government-backed companies could provide lower prices, and Hanjin couldn't compete.

"What pains me the most is that, due to the court receivership, many ship crews are in the middle of international waters like orphans, and I am very sorry and pained to have created a logistics crisis, but we did everything we could," Cho said.

As of last week, 31 of the company's 97 ships were able to off-load, but 32 cargo ships remained stranded and 34 were on the way back to South Korea to unload.