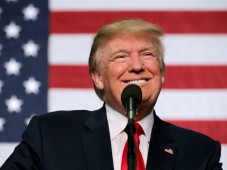 President-elect Donald Trump has made his intentions regarding Chinese goods clear, but how realistic are they? (Image via Breitbart)

From the very first stages of President-elect Donald Trump's plan for his presidency, he planned on labeling China a "currency manipulator" and imposing a 45 percent tariff on Chinese goods.

President-elect Trump isn't the only global leader taking steps toward changing trade relations with China. As The Washington Post reported, German ambassador Michael Clauss said that an "unprecedented wave" of German companies have voiced complaints about doing business in China.

"This is not just an American problem," Clauss said to The Washington Post. "China has to realize these concerns are real."

This month, the bi-partisan U.S.-China Economic and Security Review Commission said that the U.S. should bar state-owned Chinese companies from buying American businesses.

So, with all of this in mind, what exactly does the Trump administration need to do to label China a "currency manipulator?" The Washington Post lays it out fairly simply:

To judge China a currency manipulator under U.S. law, the Treasury Department would have to determine that it runs a “significant” bilateral trade surplus with the United States, a “material” current account surplus, and is “engaged in persistent one-sided intervention in the foreign exchange market.”

While China had a $356 billion surplus with the U.S. last year, its current surplus is below 3 percent of its GDP, and it actively has been working to increase its currency's value.

"It would be difficult for the new administration to direct the Treasury to say China is a currency manipulator," Eric Shimp, a policy adviser at Alston & Bird in Washington, D.C., former diplomat and trade negotiator, told The Washington Post.

Experts also said that a "blanket ban" on investment by Chinese state-owned companies is unlikely, as some employ hundreds of thousands of people in the U.S. And, if Trump holds true to his promise of rebuilding infrastructure and creating jobs, there may be exceptions to his original plan.